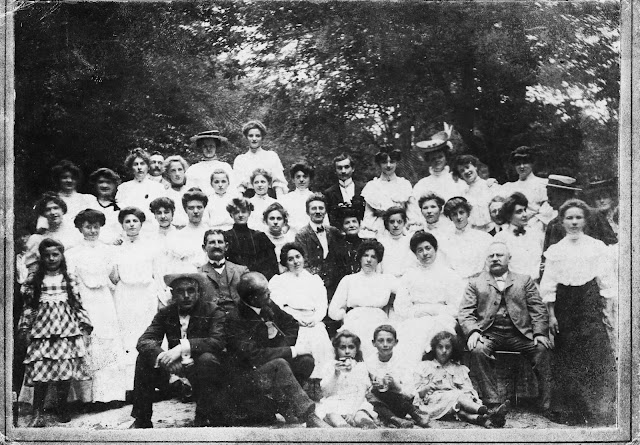 Klicken Sie, bitte!
You need to help me figure out this mystery.  So here is obviously a big family gathering, I'm guessing around 1902.    Can you recognize anyone in this picture?  Click on it to see it bigger.  Look carefully. 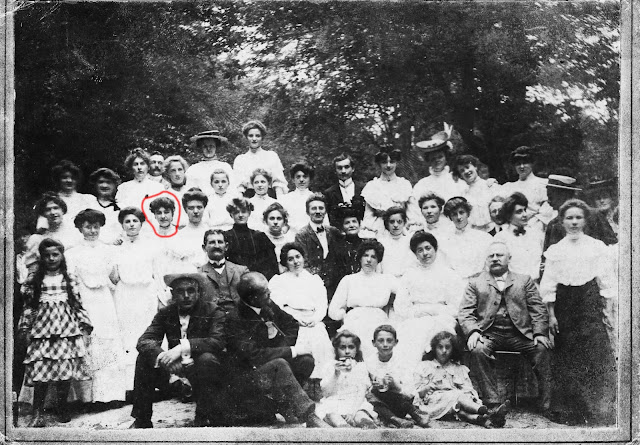 So I'm trying to figure out the rest of the picture. Who are all these people, anyway? 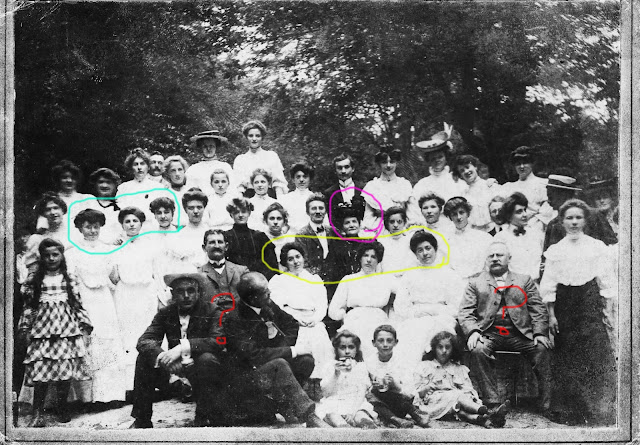 The ones circled in aqua, over to the left, I'm thinking are Grandma Sophie and her two sisters, Hanni and Lina.  They are both younger than Grandma, by four (Hanni) and seven years (Lina). 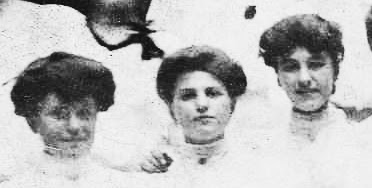 So who else might be in this picture?  Look at the lady in black in the middle: 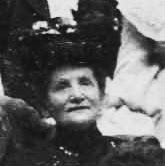 Doesn't she look like the matriarch?  She's clearly the oldest person in the picture.  Is that Sophie, Hanni, and Lina's mother?  Honestly, I don't think so.  She's way older than the girls to the left and is probably their grandmother.

My guess is that she's the mother of the three ladies in front of her:

They really look older than the Langer girls to the left, don't they?  Are they old enough to possibly be Sophie, Hanni, and Lina's mother?  If so, which one is Wilhelmine?  The one on the left, sitting closest to the girls?

And here are the men in the photo that are potentially the husbands of the three ladies: 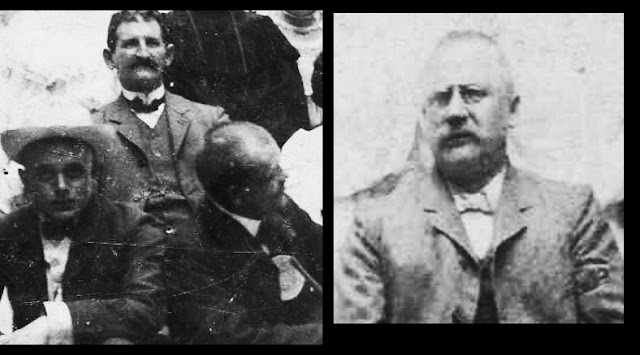 One of these might be the great-grandfather we're looking for:  Max Langer.  Do you have a guess?  I think the gentleman on the right is old enough to be the older lady's husband, so our candidates for Max might be on the left.  Since I have no idea, I choose the guy at the top, who kind of looks like he's smiling.

So,  here we might have a picture of the Schulze clan, I'm thinking.  Do you think I'm on to something, or have I veered  off in a wrong direction?  How will I ever figure out who's who?

See you next time --

P.S.  Upon reflection, I'm thinking this has to be later than 1902 -- If Grandma was 18, then Hanni would have been 14 and Lina 11.  The one I'm thinking is Lina looks way older than 11, right?  Hmmm.  I think Grandma S. got married in 1909, so maybe this picture is closer to that time?  Mysteries upon mysteries --
family history blog genealogy blog Schulze Langer