Digging through the past -- I need a bloodhound!

January 24, 2013
Hey everyone -- while digging through the past is fun (and a great sinkhole of time), it can also be mighty frustrating.  I'll give you an example.

I'm trying to find information on Grandma Sophie's parents, Max Langer and Wilhelmina Schulze.  In order to do this, I begin with searching on ancestry.com, where you can all look at the family tree (if I haven't sent you a guest invitation, let me know). So when you put Max Langer into the search box, here's what you get: 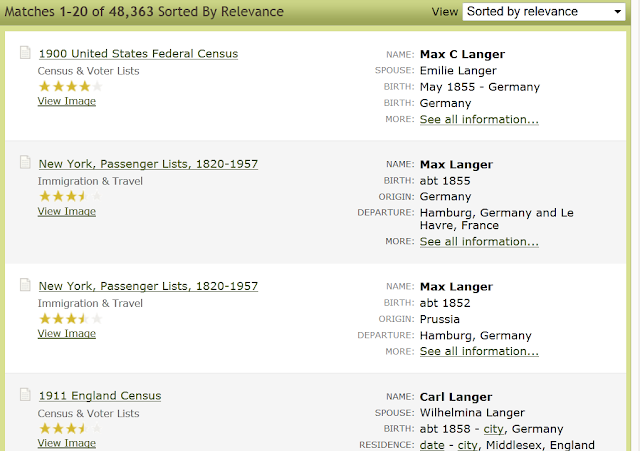 We get three Max Langers, none of whom could be our Max Langer, because all of those sources are based in the United States (NY passenger lists, 1900 US census), and Great-grandpa Max never came to the United States.  Notice that up at the top of the picture, there's a line that says, "Matches 1-20 of 48,363"  Yikes!!  Do I have to go through all that??  Same thing happens with Wilhelmina Schulze, except that there's one possibility, something in the Mecklenburg-Schwerin, Germany, Census, 1867 (in German).  I click on that with great excitement and . . . they won't let me see it unless I upgrade to a worldwide membership, for a lot more $$$.  Bummer.

Here's the thing about researching ancestors in Germany -- despite how orderly they always seem to be, records were not kept nationally, because Germany wasn't really a nation until 1871, when all the states were unified into one country.

Prior to that, it was a whole mess of independent states that all kept their own records . . . but usually, they were kept in a church, not in a government office, which again makes things more complicated.  If you don't know where your ancestor went to church . . .

Here's a map of Germany before 1871.  Every color is its own little country. 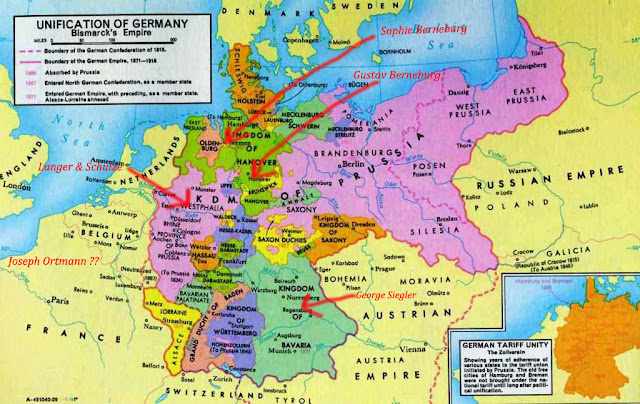 So you can see, so far our ancestors come from a number of different states;  Joseph Ortmann is off to the side, because all I can get on his birthplace is "Pommern," which is the whole  pink area, and I don't have an idea of whether it's East or West.  So there isn't one database I can go to -- it's probably 6 or 8 different databases I'd have to go through to find him.

So where to next on either Max or Wilhelmina?  Well, I've joined several email lists of amateur genealogists -- Germany has many "hobby genealogists," and they come together on these email lists to ask for advice and get help.  I joined the FamNord list, for ancestors in the northern part of Germany, a while ago, frustrated because I couldn't find any trace of records of Grandma's/Aunt Walli's birth, even though I know the exact building and which floor she was born on.  A very nice elderly gentleman offered to help me, and a week or so later he said he would go to the local archives and look up family members for me.  He did, and the next day sent me a file with all kinds of info about family members . . . and it was the wrong kind of Family Tree Maker file!  I couldn't open it!  I gently asked him whether he could save the file in a different format, and he said he would, but then I never heard back from him, and I worried that being so old, he might be sick or something like that.  I sent out a plea on the Family Tree Maker forum and lo and behold, someone gave me instructions on how to do it myself.  Finally I could open it, and here's what I found: 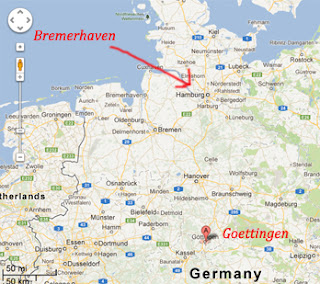 Now there's another mystery -- if he was living in Bremerhaven with Wilhelmine, and she didn't pass away until 1918, then why would he go to Goettingen before 1909 to die?  Could that be where he's from originally??  I have to look into this some more.

At the same time, another list member sent me this little snippet from a Geestemuende city directory from the year 1869:

See that line after the dash?  Up at the top it says Langer, J., who is a pharmacist evidently, and then after the dash it says "Max, working man, Leher Chaussee 92."  The Leher Chaussee part is his address, but unfortunately, I can't find that street on a modern map of Geestemuende.  I'll have to look for a historical map.

Another person on the list said that the fact that Max was listed as an "Arbeitsman" means that he couldn't have been a "Schornsteinfager" (chimney sweep), because a chimney sweep had to be licensed and have papers and so on, and he would never have called himself "Arbeitsman" if he had been a skilled tradesman. (He would have been insulting himself.)  But look at the date:  if we accept 1855 as Max's birthday, then in 1869 he would have only been 14 years old!  Would he have been listed by himself at that age?  Is that really our Max, or some other pretender, trying to confound us?

Well, I'm going to stop here, but I just wanted to give you a taste of what it's like to do this research.  Sometimes I feel like there's smoke coming out of my ears, because I'm concentrating and thinking so hard.  But in the end, it's really fun.  Here's a picture of the grave of the famous mathematician Karl Friedrich Gauss in Goettingen.  Maybe if we went there together we could find our great/great-great/ great-great-great grandfather's tombstone!  I'd like to try -- 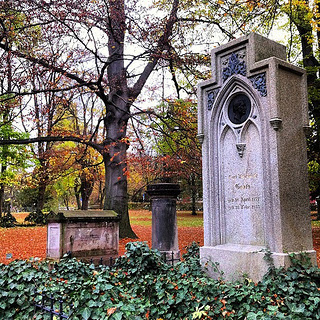