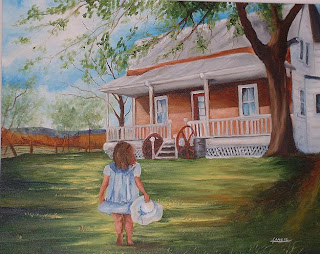 One of our grandmas (Berneburg) lived with us, so her "house" was the bedroom next to Deb's and mine, and the other grandma (Ortman) lived far away, at 19 Cox Place in Brooklyn, New York: 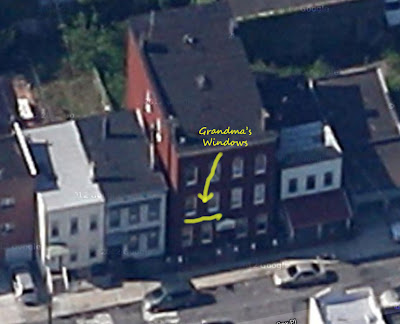 This is a view from a property website.  I did the best I could to erase their watermark.

Well, that's another photo I can't find, one that showed that at Grandma's house, you could stand in the living room doorway and look all the way to the other end of the house and out the kitchen window.  All the rooms were lined up:  Living room, bedroom, bedroom, kitchen (with bath) like they were railroad cars, and there was no hallway -- in order to get to the kitchen, you had to walk through both bedrooms, one after the other, and in my memory, the bedrooms didn't have doors (could that be really true??).  It was kind of like this:

Even though it wasn't an over-the-river-and-through-the-woods type of Grandma's house, I loved Grandma's apartment.  Several things about this apartment were very fascinating to me.

1.  I had never been in any kind of apartment before (well, except when I was born and Mom and Dad lived in an apartment, but I was less than 2 years old when they got a house), so this alone was exciting.  Mail boxes down by the front door!  You had to be buzzed in!  So cool!  (Note:  I had been in the apartment before, but after we moved to Minnesota, when I was 3, I lost my memories of it, until I came back, at 5 or so.)

2.  You could see all the way through to the back of the apartment!  You had to actually walk through all of the bedrooms in order to get to the kitchen or bathroom!  If I am remembering correctly, Grandma's bedroom was in the front, and Dad's (Grandpa Bill's) bedroom was next to the kitchen.   When I was old enough to have this thought, I wondered what it was like for Bill as a young man to come home from a date and tiptoe through his parents' room to get to his own.  Strange, huh?

3.  There were no closets!  On one side of each bedroom, there were wall-to-wall cupboards and drawers, but no actual closets.  No closets at all!

4.  This one is so great -- the toilet and the bathtub/sink were in separate rooms -- how strange, and to flush the toilet, you had to pull a chain, because the tank was up high on the wall!  Woohoo!  I think I used the bathroom at Grandma's house more than anywhere else, because I loved pulling that chain.

5.  This one I'm pretty sure about:  There was a fire escape out the back!  Stairs going down to the back yard!  But I may not be remembering correctly on this one.

6.  The whole place smelled like mothballs.  Since then, I have always loved that smell.  It smells like Grandma's house.

When we lived in New Jersey, where DD was born, of course we would go to visit Grandma, much more than we were able to after we moved to Minnesota.  I was very little, maybe 18 months old or two, when Grandma would line up little pieces of cheese on the edge of the kitchen table, and I would be a mousie and go up and steal the pieces, one by one.

Grandma also had a dear friend, Mrs. Barton, who lived upstairs.  I actually do remember being in Mrs. Barton's apartment, but I think that memory is much later than this memory:  I so very sweetly would say "Bah . . . coogie?" and Mrs. Barton would give me a cookie.  They thought it was so cute, they would make me say it a lot.  That's probably what started off my lifelong craving for sweets -- all those "coogies" from Mrs. Barton. 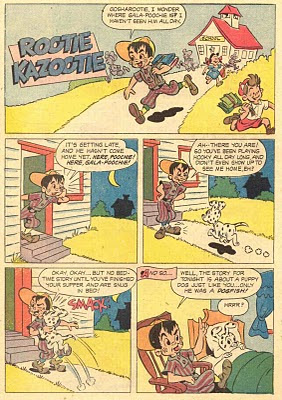 Last thing for today -- there was a little store at the end of Grandma and Grandpa's block, and they served egg creams (yum!) and I think a round kind of ice cream sandwich.  Grandpa would save up the funny papers from the Sunday paper for a couple of weeks, then he would send them to us.  (They were sooo much better than the Minnesota ones!  And they smelled like cigars!)

Well, that's about all the time I have for tripping down memory lane today -- anyone who remembers have anything else to add?