The Ortmans and Berneburgs have a long history with Christ Evangelical Lutheran Church in Ozone Park, Queens, New York.  Here's a map on which I've marked a bunch of family history: 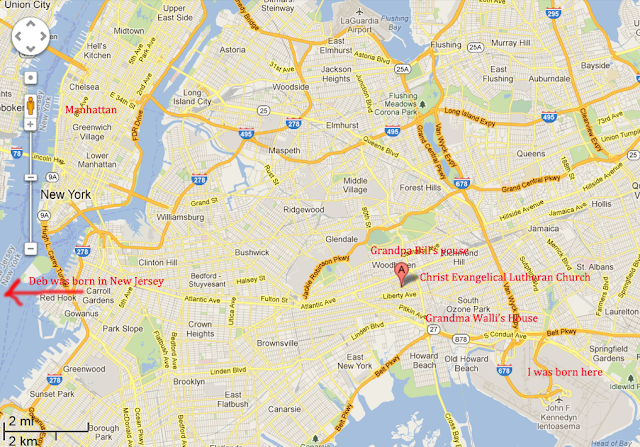 Here's the church as it first was, in 1880.  This is where in 1895 Grandma Ortman was baptized with the name Maria Siegler (though she was also known as Mary, Marie, and Mae, which makes things confusing!), parents George Siegler and Mathilde Hug Siegler.  Probably the Sieglers were the only family members going to church here until the late 1920's, when the formerly Catholic William John Ortman and the Berneburgs get into the picture. 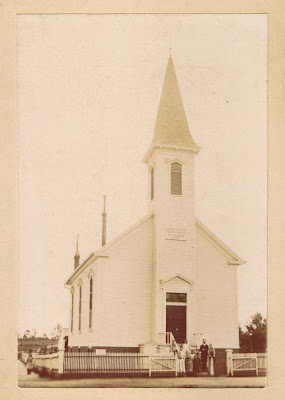 There's one mysterious thing I don't have much information on.  When ancestry.com gave me hints on Maria Siegler, it connected me with historical documents that said she was married at the age of 21, in 1916, to someone named Frank Schnack and that they had a daughter.  Frank passed away in 1918, and since he had weak lungs that disqualified him from service in WWI, I'm guessing it was the influenza epidemic, but I'm not sure.  (BTW, Grandma Sophie's mother, Wilhelmina Langer, died in Germany in that same influenza epidemic.)  I have no information on this child, who was not a part of the Ortman family, a great-aunt we have no knowledge of.  Very intriguing -- undoubtedly an interesting story in there somewhere!  I assume William John knew when he married her, but I never heard a whiff of anything like this from Grandpa Bill (or Grandma Ortman herself, when she was living).

Here's the church as it was rebuilt in 1917.  It was all ready for the wedding of Maria Siegler and William John Ortman, probably in 1923 or so.  I don't have the exact date and don't know whether they really were married here, but given all the history, it's a pretty good guess. 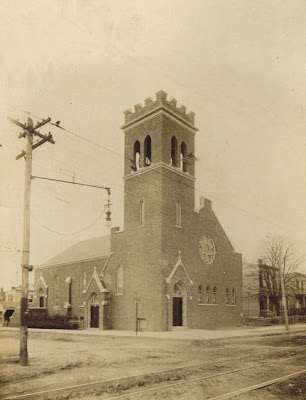 By the time the church was rebuilt, it had a new pastor:  the Reverend Dr. Hugo E. Meyer, and this is where the Meyers come into the story . . . Dr. Meyer, as everyone (except maybe his wife and son, but I'm not even sure about that) called him, was not only a pastor but also an authority on snakes, and had quite a collection of them, mostly preserved in jars, but some not -- 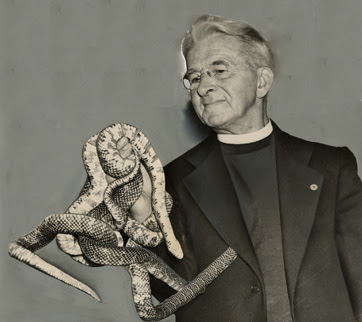 That's got to be more than one snake, right?  Eeeek.  I met Mrs. Meyer once when I was maybe 5 or so and saw the snakes -- we went back to New York to visit (I think this was the time I got mumps as we were about to leave, and Grandma Walli said that they had to smuggle me into motels because they didn't want the management to know they were harboring someone with a communicable disease).  Anyway, Dr. Meyer was a very educated and admirable man, and he and his wife had a wonderful son, Ernest A. Meyer, who also became a pastor and took over the church in 1935 AND who married Maria Siegler's sister Dorothy, so you see how it's all tangled up in this church! 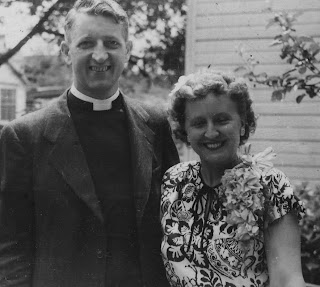 So the next big event was the baptism of William John Ortman Jr., the little baby of William John and Maria, in 1925, followed shortly by the arrival of Gustav, Sophie, Erich and Waltraud Berneburg, in 1928, probably.  That was the year that they emigrated to the U.S.  So here we have little Grandpa Bill and little Grandma Walli, aged 3 and 2, going to the same church!

Grandma Walli said that all her life, she sat in church and listened to Grandpa Bill sing, from the time they were kids until her early 20's, when they finally got together and started going out.  That image really pleases me -- the small girl listening to the lovely voice of her future husband.  Which reminds me of the time we were listening to Dad sing in church one Good Friday, and Chris, 2 or 3 at the time, stood up on the pew, turned around and pointed at the choir loft, and said -- very loudly -- "THAT'S MY DAD!!!"  Everyone in the church laughed.  (P.S. get Dad/Grandpa Chris to tell you some of his other church stories . . . )  Walli and Bill were also confirmed in the church as teenagers.

If we jump ahead to the 29th of April, 1949, we have Bill and Walli's wedding (again, click to see the whole picture): 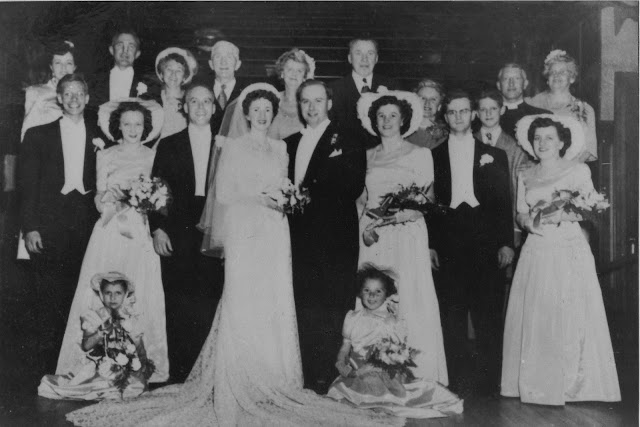 In the back row:  Hilda Berneburg, Erich Berneburg, Sophie Berneburg, Gustav Berneburg, Mae Ortman, William John Ortman, Dorothy Meyer (Shorty, right?), young Ernest Meyer, Pastor (Uncle Ernest) Meyer, and his mother, Mrs. Meyer (Dr. Meyer's widow).   In the middle row are Walli and Bill and the wedding party, none of whose names I know any more, and in the front are two little ladies whom I won't name but who will recognize themselves when they see this.

Now we come to the very most special important event of all:  the baptism of ME!!!  :)  on October 1st, 1950.  When I was baptized, the inside of the church looked like this: 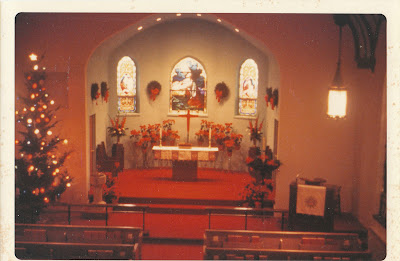 I loved visiting the church when I was little -- my cousin would take me "backstage" so that I could see all the behind-the-scenes secrets.  I wish that we could all gather there now to celebrate our family's history.  I'm sending contributions to their building fund -- by now, the church is very old and threatened with being closed.  But even if it does close, Christ Lutheran will always be a part of my family.

Oh, and P.S., one more little tidbit:  When Grandma Ortman was a young working woman, she used to ride the bus to work every day with someone who hit it big -- the movie star Mae West (maybe that's why Grandma O liked to be called Mae?) 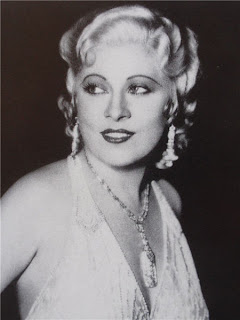