March 25, 2013
Hey everybody, long time no blog!  Now that I've started teaching again, I remember how teaching only two classes tends to suck up every waking moment of your life.  But now -- it's spring break, so I get a week to breathe!

Update on the DNA thing -- my sample at the Genographic Project is 60% done; it's being analyzed right now and I hope that it will be complete very soon!  Seems like it's been forever.  And big news:  Grandpa Chris has sent in his sample too!  So we'll have a complete picture, as far as the Ortmans are concerned.  Ancestry.com (where I had my first sample analyzed) has decided to release the raw DNA data so that you can have it uploaded to another site and compare it with different people.  It's kind of complicated, but I'm exploring the possibility.

So I've spent my morning lost in the Hug branch of the tree.  The Hugs (a short form of Hugo, I think) come in through Grandma Mae Ortman, whose mother was Matilda Hug.  There's another researcher on Ancestry.com who is related to us through our 4th great-grandfather (well, she and a bazillion other people are related to us), and she's done a lot of research on our mutual relatives.  I'm back all the way through the 1700's on them.

They are all from the area of Germany that is way in the southeast, close to the city of Strasbourg but also close to both France and Switzerland.  The area is starting to be mountainous and they are in the Black Forest, home to many fairy tales.  Here's a map:


The area where the Hug family was from. 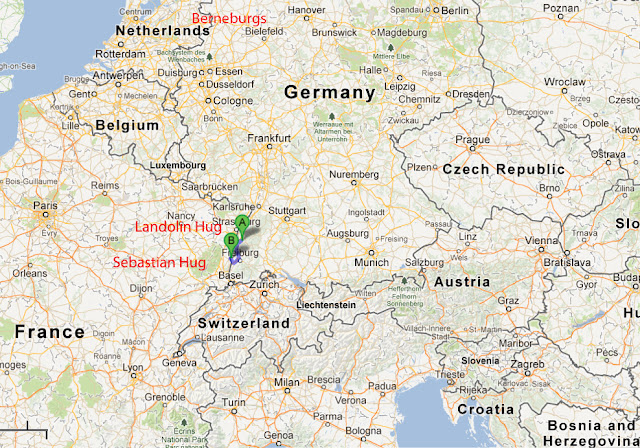 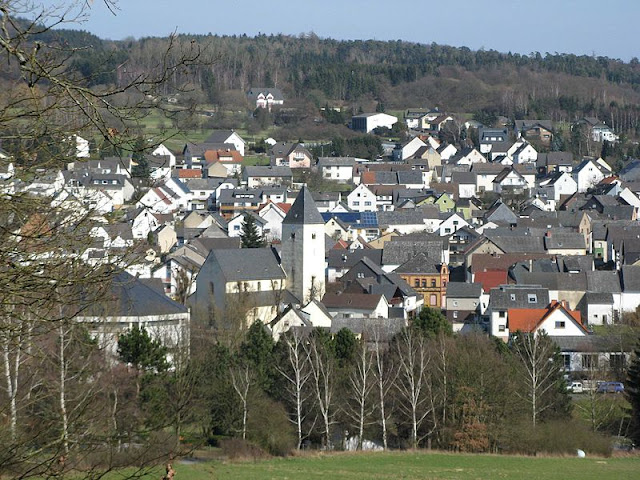 Lahr, where Blasius Hug was born.

Blasius got married in 1752 to Salome Bernauer, and they had several children.  There's a bit of a puzzlement here, because Blasius and Salome were married in November of 1752, but their son Landolin (1752-1825), EDC's 4th great-grandfather, seems to have been born in September of 1752.  Hmmmm.  Of course, the dates are completely unreliable -- I just discovered one of the ancestors was recorded as having been born in 1766 and died in 1765!  Obviously, that's wrong.  I'm assuming it was 1706, but then she would have been married at the age of 13 . . . possible, I guess.  The problem comes when you're picking up things from other people's family trees, and if one has a mistake, everyone else copies it. 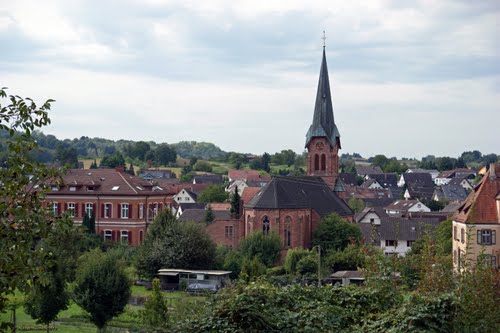 Landolin's sons Benedict (EDC's 3rd great-grandfather) and Sebastian were born in the same town, and while we don't know much about them, we do know that Benedict stayed pretty much to home while Sebastian left, because at one point he was the mayor of Breisach, Germany, seen in this old photograph: 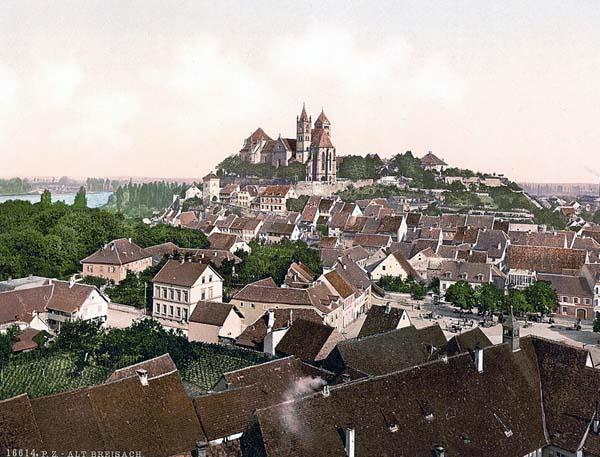 This is the Rathaus in Breisach, the city hall where the mayor would have served.  I haven't done enough research to find out whether Sebastian would have governed from this particular building, but I kind of doubt it because the whole town was pretty much burned to the ground in 1893 during the war with Napoleon. 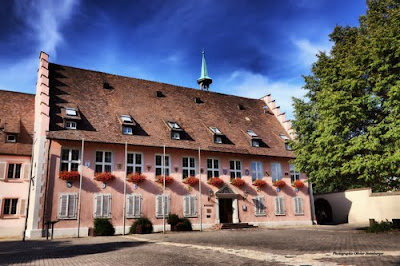 And finally, here's a nice little video I found of the town of Breisach -- while it's not Lahr or Friesheim, it does give you an idea of what the area is like.  It has nice music, too.  See if it gives you a feeling of "home," somewhere in your ancestral brain --