April 26, 2013
So here we are in the Mesolithic Age, approximately 6350 years BP (before the present).  Archaeologists and anthropologists know a fair amount about this time, based on excavations of burial sites, carbon dating, DNA testing, analyzing the artifacts buried with the people, and so on.  A museum in the Netherlands has recreated a European Mesolithic hut, in which our distant ancestors might have lived: These people not only hunted but fished as well, setting up traps to capture large numbers of fish.  And they loved shellfish, if the number of shells in their trash heaps is any indication.  (Wouldn't it be fun to be an anthropologist and have your job consist of going through the trash of people who lived thousands of years ago?  It sounds pretty interesting to me -- )  When a burial place is discovered, the researchers very carefully remove the dirt and uncover the skeletons, and they find and catalog every little piece of something they find.  Here's what one site in France looked like when uncovered: 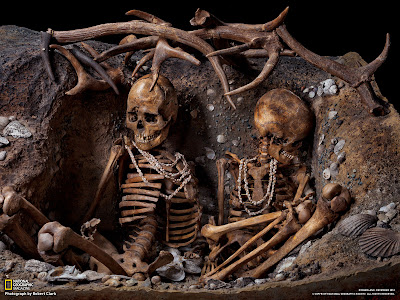 As you can see, these two ladies were buried with deer antlers, shells of various kinds, and jewelry.  By looking at all these things, researchers can make good guesses about what the lives of these ancient people were like.

Anthropologists have long speculated about how Europe went from a hunter-gatherer culture to a farming-herding culture, which is what characterizes the Neolithic (late Stone Age) period, when people made lots of progress in manufacturing tools and so on.  They came up from the south and spread all over Europe, eventually. 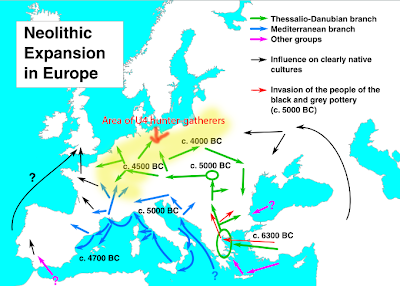 The yellow area is where we were.

That's all for today -- I'll keep going on the Neolithic research, and after that comes the Bronze Age, which means we're coming closer to the present day -- see you next time --
DNA family history blog genealogy blog haplogroup haplogroup U4 mesolithic mtDNA neolithic U4b1a1a1