April 13, 2013
Hello again, everyone!  I thought I'd continue the story of our U-mother (some have named her Ulrike, meaning "mistress of all"). 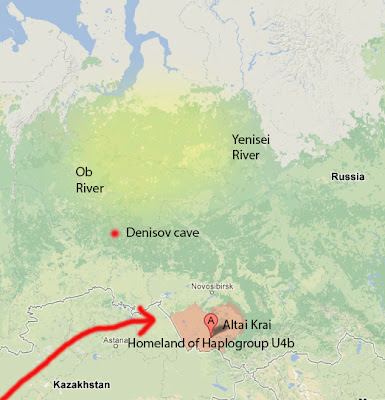 This is part of the map we looked at yesterday, so we can focus in better on the area we're talking about.  We saw the U group in the Middle East split up into various numbered U's, and our group, U4, headed northeast.  Along the way, it must have split up too, because by the time we got to Altai Krai, we were an even narrower group, U4b.   So here we are in the western steppes of Russia. 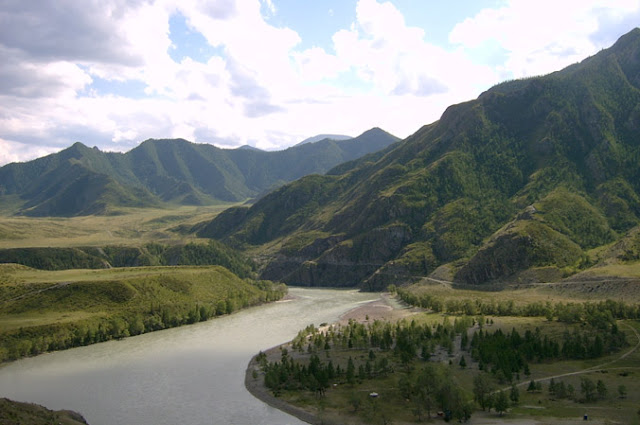 At some point, our group started wandering north, as the glaciers of the Pleistocene ice ages receded.  But there's something else we could have seen in that picture:  lions and equids and mammoths, oh my!

The animals were adapted to the very cold habitat, and likely as the ice receded, the animals followed it, and the people followed them, until our U4b group wound up in the area highlighted in yellow on the map -- the area between the Ob and Yenisei rivers in Siberia.  Imagine our U4b ancestors dining on wooly mammoth roasted on an open fire!  (At this point, Grandpa Bill would have started singing to the tune of "The Christmas Song.")

So here we are in sunny Siberia.  And we are somewhat unique! Today, only 2% of Europeans belong to this group, and only 1.6% of people in England and Wales.  (I haven't found the US figure yet.)  The highest percentages today are found among the Khanty and the Mansis people, who live in northwestern Siberia.  Here are a few pictures I think are pretty cool -- would you like to be in a reindeer race?? 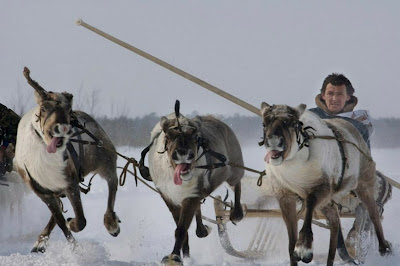 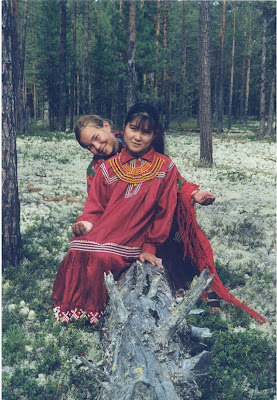 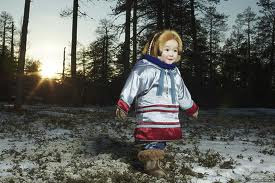 So I'll leave you with one more thing for today.  Brace yourselves -- my results show that 6.7% of my DNA is non-human, 2.9% Neanderthal and 3.8% Denisovan, to be exact.  These were "cousins" of Homo Sapiens, descended from a common ancestor about a million years ago, but they didn't survive long past the Pleistocene era.  Evidently they were close enough to humans to "get together," so to say, so we have the traces of their existence in our DNA -- isn't that incredible?  Go back and look at the map one last time -- see where the "Denisova cave" is?  Archaeologists have very recently (2008) found tiny fragments of a juvenile female Denisovan -- a tooth and a tiny fragment of a pinky finger -- and analyzed their DNA, and that DNA still exists in us.  So don't make me mad -- I'll go all cave woman on you . . . here are a couple pictures of what a Neanderthal or a Denisovan might have looked like. (Obviously not from life :) 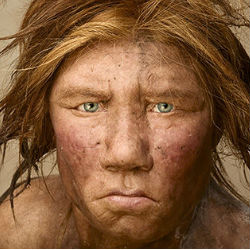 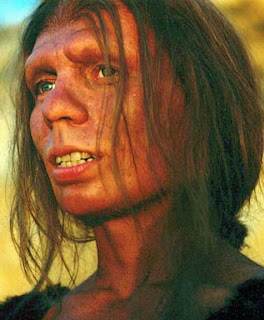 So isn't it interesting that our U4b group is from exactly the same place as the Denisovans?  (I'm sure they were other places, too, but they haven't found much else so far.)