May 05, 2013
Just got back today from "My German Roots:  A Festival for German Genealogists," in Sacramento.  I had a great time!  They had multiple sessions going on at the same time, but they gave us a spiral bound book so that we wound up with information from every presentation, which was very cool.

It was held at a huuuuge Presbyterian church, and maybe 100 people were there.  If you were to zoom in on this picture, you'd see that just about everyone's hair is on the spectrum between grey and white -- it was a bunch of oldsters, all right. 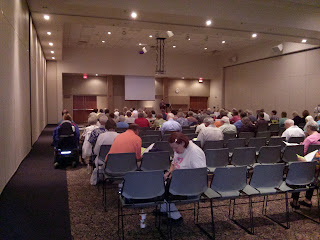 But, that's who has time for genealogy, because it is definitely a huge sinkhole of time.  So there were multiple presenters, a professor from Brigham Young University and six of his students, who gave presentations on all kinds of things.  I chose to go to sessions on

Sounds kind of dry, but really, it was very interesting.  My favorite one was on status in German society -- it was fascinating, and it actually gave me some insight into a bit of our own family history. 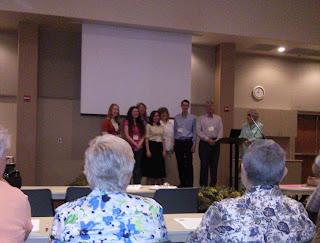 The presenters are introduced --

Dr. Minert started off the first presentation by saying that Germany is the hardest country in Europe to do family history in, which bummed everyone for a minute, but then we all knew this anyway.  This is because of what I've mentioned in the past -- something called "Germany" didn't exist until late in the 1800's; before that it was a collection of separate little kingdoms and there was no central government whatsoever to keep records. 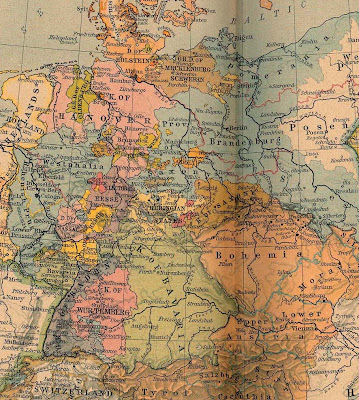 What Germany looked like pre-unification -- every different colored area is a different kingdom.
So, we spent the rest of the day acquiring some tools so that we can forge ahead with our family research.  I realize that at some point, I'll spend some time in Salt Lake City at the LDS library, because they have endless records that you can consult (that are not online).  While it's possible to borrow materials and have them sent to the local branch of the LDS library (yes, we have one in Santa Cruz), it quickly becomes very expensive to do that because it costs about $8.00 for each microfilm you borrow.  When you have a lot to look for, you realize that it would be much faster and probably wouldn't cost that much more to just go to Salt Lake and put in an intense week of work.

I wound up getting several books -- They Came in Ships, The German Research Companion, and Deciphering Handwriting in German Documents.  My German research book already has a whole bunch of post-its marking pages that have ideas of places I can look for more information. 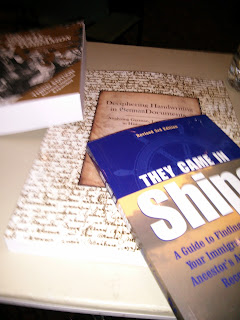 So, as I said, the lecture on social classes was very interesting and I understand now a little more about something mysterious in our history.  This has to do with our (EDC) 5th great-grandfather, Blasius Hug, who was in the butcher's guild in Heiligenzell. 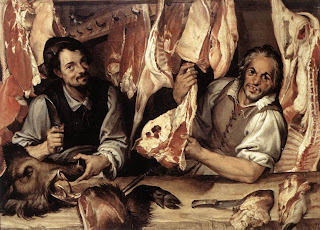 The Orts-Familienbuch pages (from church records) that a fellow genealogist in Germany sent me said that Blasius Hug married Salome Bernauer on the 6th of November, 1752.  He was not from Heiligenzell, where they got married -- he was born in Wolfach, which is about 36 km (22 miles) away, which doesn't seem far to us but in 1752 it was a long way through mountainous country, and you had to walk.  What brought him to Heiligenzell, where he met his bride?  And why was Blasius and Salome's first son, Landolin, baptized two months before they got married, on September 6th, 1752?

Well, I learned that Blasius was likely a journeyman butcher, someone who had served an apprenticeship in Wolfach and then had to go on the road for three years and 1 day before he could go through the examination to be a master butcher.  Sounds strange, but during the journeyman phase, you were not allowed to go home, even if your mother died -- you had to stay away from your home village for three years and one day.  In order to become a master butcher (Meistermetzger), you had to produce a master work or masterpiece, and then you were given the honor.

Evidently our 5th great-grandfather never made that last step to Meistermetzger, but his son Christian did.  Christian was not only a Meistermetzger, but the owner of an inn as well.   Blasius' first son Landolin, however, remained a day laborer and worker in a vineyard.  This, as far as I can figure, is because Landolin was illegitimate, and therefore unqualified to belong to any guild and engage in any trade.  It's kind of mysterious, because if his parents had married any time up until the moment of his birth, he would have been legitimate, but they waited until two months after he was born.  So he stayed a day laborer, while his brother, the second son, became the master butcher.  Interesting, no? This is a mystery (why they didn't marry until it was too late) that we'll never have the answer to, unfortunately.  But at least we have a little more insight into it.