Can I have a drum roll, please?

June 18, 2013
23andme finally finished analyzing my DNA sample (the results have come in bit by bit), and gave me the ethnic/nationality composition.  This is the first one that makes sense to me:

This seems more reasonable, doesn't it, than the first one that said I was 38% British Isles or whatever?  I think they lump French and German together because the border has been fluid, and our Hug line is right on the border of France.  I don't know why there's such a large chunk of "Nonspecific Northern European," but I'll try to find out what's up with that.  It will be interesting to see how Chris's analysis matches up to this. 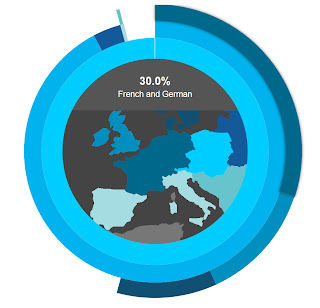