The Story of Joseph Ortmann

July 18, 2013
Hi everyone -- I've been away from blogging for a bit, but am raring to get going on it again.  I've been working hard on EDC's great-grandfather, Joseph Ortmann, but still not getting any information on his birthplace in Germany, which is keeping me from going farther back.  One of the books I have suggests that if you're stuck, you write everything you know about the person, telling their story.  So that's what I'll do here.

Joseph's story brings in a state we haven't talked about -- New Jersey.  Grandpa Bill Ortman, despite having grown up in New York, was actually a "Jersey boy," since he was born in Union City, New Jersey.  Deb Ortman was born in New Jersey, too, since we lived there (Cedar Grove, suburb of Newark) before we moved to Minnesota.  So we Ortmans do have roots in that state.

New Jersey, with our neck of the woods circled in green.

Joseph Ortmann was born in 1848 (in July) in "Pommern," Germany.  Pomerania, or Pommern, was a part of West Prussia that is now Poland -- in the map below, it's the light turquoise area at the top.  I'm not sure how I know this, but I believe his father's name was August or Augustus, and this guess is given a little weight by the fact that Joseph's first-born son was named Augustus J. (for Joseph?) Ortmann. 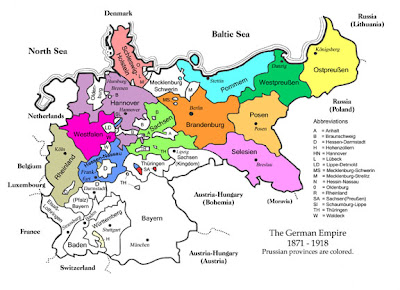 Pommern doesn't look that big, but without a city name, we're stuck.  But I have lots of documentation about his life in America.

Joseph came to America in 1861, and though I can't find the record of that voyage (which might include his birthplace), that's the year he gave in later documents.  He was 13 at the time he came here, suggesting that he must have come over with someone, but I haven't found who that was.   If you remember your history (and even if you don't), 1861 was the first year of the Civil War, and though he was too young in that year, Joseph did serve in the Union navy as a "steerage cook" in 1864-1865.  We know this because he later applied for a pension, and his wife also claimed the pension after his death.  According to his pension document, he served on the USS Ohio, Vermont, Honduras, and Hibiscus -- a lot of ships to be on in one or two years! 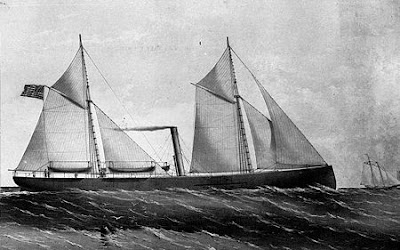 By combining information from city directories and census data, I can follow Joseph through the years and through different professions.  Here's what he was up to over the years:

1880:  He shows up on a voter registration roll, at the same address as above.  This tells us that at some point, he became a citizen.  And in the 1880 census, his occupation is listed as "retail store."

1882:  The city directory has him at the same address, but this time his occupation is "candy." 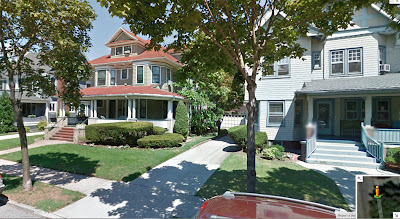 At this point, he's changed professions and is listed as "butcher."

1891:  Big gap here, but he's still a butcher.  He lives at 395 7th Avenue, but I can't tell whether this is in Manhattan (in which case it's across the street from Madison Square Garden) or Brooklyn.  I think it's Manhattan, because that's where his next residence was. 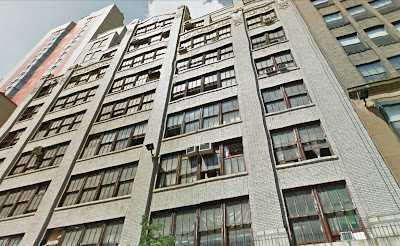 By the 1910 census, they've moved to Union City, New Jersey, living at 213 4th St. and he's still a cabinet maker, with the extra notation "Chairs."

Civil War records show that in September of 1909 he had applied for (and been granted) a pension, for the reason that he was an "invalid." I'm not sure why he still lists himself with a job in 1910.  But by this time, our great-grandfather was 63, and evidently not well.  He passed away on June 11 of 1911, for reasons unknown.

Through the library in Jersey City, I'm trying to see if there's an obituary in one of the local New Jersey papers -- they're researching that for me.  But a brief notice did appear in the New York Times: 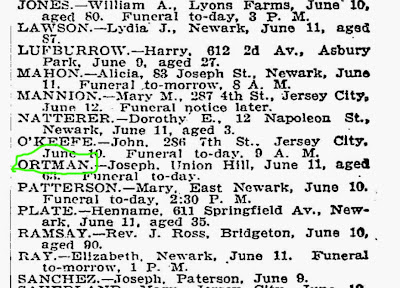 Interesting, isn't it, what you can find out about a life?  I wish I had a picture of him, but I don't have a single picture from Grandpa Bill's side of the family that goes back further than his mother and father.  I do know that Annie, his wife, lived until 1936, and that some of their children left the NY/NJ area -- Augustus moved to Pennsylvania, and Joseph moved to California, a long way away!

Well, that's all I know.  I'm hoping that the library turns up an obituary or other document that might say where he was born -- I'll let you know if they do!
civil war veteran family history family history blog genealogy genealogy blog Ortmann