August 21, 2013
A while ago, brother Chris had his DNA analyzed, to find the Y-DNA history in our family, that goes back through Grandpa Bill Ortman's line. (When I had mine done, it was mt-DNA, the line going back through Grandma Walli.)  All this stuff is very complex and (at my age :) difficult to understand, but I've been puzzling through it.  First, the basic stuff we learned. 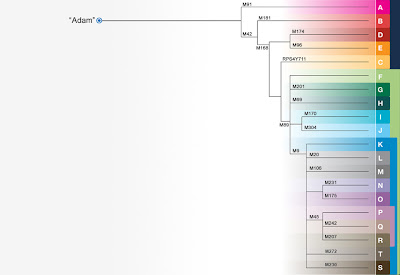 So much as it was with my chart, which started with "Mitochondrial Eve" in East Africa, this one starts with "Adam" (also in East Africa -- they had to be in the same neighborhood, right?), and much as mine broke up into smaller groups with letters representing groups that went off in different directions, so does this one.  Our path (through Grandpa Bill) went from Adam following the A, B, F paths, then K, then P, and finally to R, third from the bottom, in the brown part of the chart.  We are R-M269, as a matter of fact, which is easier to remember than U4b1a1a1 on Grandma Walli's side.

So what does that mean, other than a bunch of scientific notation?  Here's a migration map. 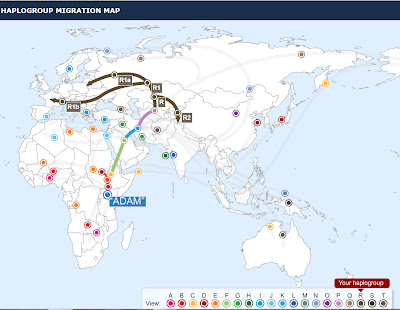 We are the green-blue-purple line coming east out of Africa and going to West Eurasia (much as our UB4 group did), and then heading west from there to Europe.  One more map; this one shows the distribution of the various groups in different areas. As you can see on the pie chart (ours is the top one on the left-hand side), the R-group accounts for almost half the Y-DNA in Europe. 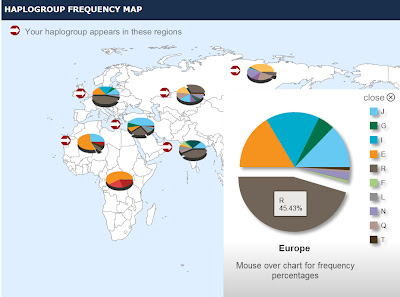 So where on Grandma Walli's side, we come from a pretty unusual haplogroup (the people on the same branch of the tree), on Grandpa Bill's we are well-distributed, all over Europe.

Unlike the Ancestry or Genographic DNA results I got, this one doesn't really give you the breakdown of countries or areas you're probably from, but it tells you where your matches are from.  This is where it gets a little bit hairy, trying to understand it, but maybe this will help: 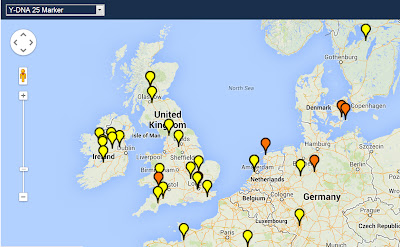 When they compare Chris' DNA to other people who have been tested with Family Tree DNA, they look at 12, 25, and 37 "markers" on the chromosomes, places where they know what the normal sequences of the gene will be (I'll explain more about this in the next post) and what the variations are.  This map shows people who matched up on Chris' 25 markers -- if I understand this correctly, the people in orange match 24 of Chris' 25 markers, and the yellow people match 23 of 25 markers.  Interestingly, most of them live in the UK; only three show up in Germany.  (There are also a number in the US, mostly on the East Coast and one, interestingly, in Buraev, Siberia).

Does this mean we're definitely related to these people?  Not quite.   Let's take one, DJC, who lives at St Mary Hill, Llangan, The Vale of Glamorgan, UK (isn't that a gorgeous address?).  If we had the same surname, the odds would be higher, but we don't, so the table tells us that we have a 28% chance of sharing an ancestor within the last four generations, and an almost 60% chance of sharing an ancestor within the last eight generations.  If we were to go back 24 generations (which almost nobody can, records getting very dicey farther back than the 1500's), we'd have a 98% chance of having a common ancestor.  The problem, however, is that in Grandpa Bill's paternal line, I can't get back past the fourth generation, Joseph Ortmann, because I don't know where he came from in Germany.  (That's why I'm working so hard on him.)  Until I can break through that brick wall, we don't have any way of comparing family trees with DJC (if he's willing to do so)  back eight generations or more.

So, enough for one day.  Here's a picture of a church in Llangan, UK, which is near Cardiff in Wales.  I think that while the Wormuths are in England in November, we should just show up at DJC's door and tell him we're his long-lost cousins.  We totally should do that, right? 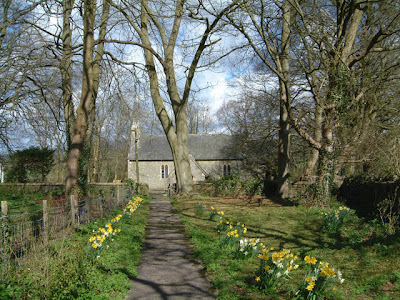