September 14, 2013
I woke up at 6AM today, "too exthited to thleep," as the little boy in the Disneyland commercial says, and of course I was thinking about Joseph Ortmann and Erkeln and Brakel and so on.  One thing I was contemplating was the names -- in looking for Joseph in various locations, I was paying attention to the first names I was seeing, because often children were named for grandparents or other relatives and so on.  Interestingly, though Joseph's father's name was Conrad (and he was named for his father, Conrad), none of Joseph's sons has Conrad as a first or middle name.  His first son was Augustus J. (J = Joseph, I assume), but I see no Augustus anywhere in the family trees.  The second was Joseph Bernard, and Bernard comes from both sides of the family -- Joseph had an uncle named Bernard, and Annie's father was Bernard.  His third son was Herman Henry -- don't know where the "Herman" came from, but Joseph had a brother named Heinrich (Henry) and that was Annie's father's middle name as well.   His fourth son picks up the "Henry" again, his name being Henry Anthony.  And his fifth son, EDC's grandfather, was named William John (his actual birth certificate says "Willy," which is kind of sweet).  As far as the girls were concerned, Mary Theresa was named for Joseph's mother (Theresia) and one of his half-sisters (Maria Theresia), and Anna was named for her mother.  For the others, Adelaide and Catherine, I don't see any connection.

So why are none of Joseph's sons given the name Conrad?  Could there have been conflict between Conrad and his second son that caused him to leave home and go to America?  We don't know.

Here are a few more interesting pictures from Erkeln/Brakel: 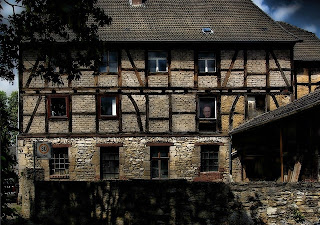 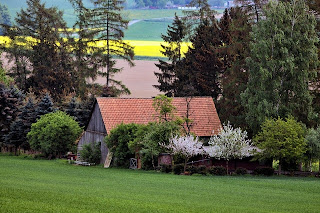 Maybe this was their barn?