Back at the Writing Desk --

December 03, 2013
Well, as I'm sure you noticed, I didn't post something every day in November.  Oh well.  But I did have lots of fun, especially going to England, and I hope you won't mind if I make a diversion and write a little about that.

I'm working on my pictures.  I opted not to take my "big" camera and rather took a small point-and-shoot.  There were pluses and minuses to that decision, but I really didn't want to be burdened with the heavy camera, worried about losing it or having it stolen, etc.  Unfortunately, the little camera I got didn't take great pictures, especially in low light, so I didn't get the kinds of shots I wanted.  But here's an example of one that came out well: 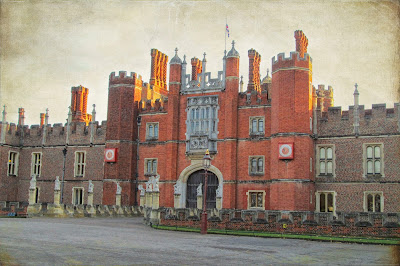 This is Hampton Court, originally built in the 1500's by Cardinal Wolsey, and was later appropriated by Henry VIII.  We didn't get to go inside, but rather toured the gardens, early in the morning.  It's a beautiful place in a beautiful setting, and I'm longing to go back so I can see the inside!