Official Records . . . and the Kindness of Strangers

June 16, 2014
What's frustrating and sort of amazing about genealogy is that you can search and search and come up with nothing, and then suddenly an avenue opens up and you find yourself breaking through to wonderful new information.  I think the trick, in this internet age, is to use every single resource available to you, including email lists, forums, and Facebook pages.  The wider net you cast, the more likely you are to come up with something or someone that can help you.

Official records are very important, of course -- one line of our ancestors broke wide open when I ordered the death certificate of Maximilian Langer (Grandma B's father), because it gave me so much information; the same with Joseph Ortmann's New Jersey death certificate.  So this week I've ordered Grandpa Berneburg's, just to see what it has to say in terms of his parents, and Great-grandpa George Siegler's (Grandpa Bill's grandfather), to see if it has his parents' names as well, because I haven't had much luck in finding anything about him online.  I'm looking forward to getting those.

One thing that's very frustrating in searching records is that names were often spelled differently at different times, and you have to search on as many variations as possible.  Grandma Ortman's birth name was Mary, but when we knew her, she was called Mae -- and she told me that her original name was Maria.  And I just found a Social Security record for her under the spelling of May.  And then Ortman can be spelled Ortmann, but a search also pops Hartman up, and I've seen on one of the censuses that the name was written down as Artmann, and that was picked up by Family Search and recorded that way. And don't get me started on Waltraud -- Grandma Walli's name is mangled every which way on the various censuses:  Wahtrand, for example.

The other thing I've found in the past couple of years is that people who do genealogy are so generous with their time and help.  Just today a woman on the "German Genealogy" Facebook page said that she'll be in an archive tomorrow in Germany and will probably have some extra time -- did anyone have anything they wanted looked up?  She got plenty of responders! 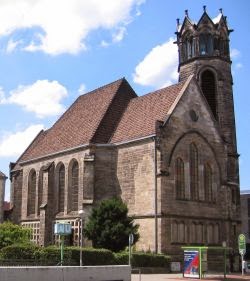 I've had people send me xeroxes of pages from an Ortsfamilienbuch (historical record of people living in a particular town), go to various archives while asking nothing in return, translate documents and other texts, spend time with me via email trying to sort out some lineage, give excellent suggestions for places to search online --  every single person I've met in the pursuit of genealogy has been very, very kind.  Through the administrator of one of the Facebook pages, a secretary at the Reformed Church in Linden, Hannover, Germany, spent hours going through historical records, looking for Grandpa Berneburg (which is how we figured out that he has a different mother . . . ) -- I did make a contribution to the church for that work!

I should just give a shout out, I guess, to the folks in the Sacramento German Genealogy Society; the Hudson County, New Jersey, Historical Society; the Facebook pages for German Genealogy, Genealogia Silesiae Superioris, the Genealogy of Lower Saxony, the German Language Area DNA Research Project, and the U4 Haplogroup.   People in all these various places have been very helpful to me.

So, I've just been meaning to put that out there for a while, that I very much appreciate the kindness and helpfulness of others in the genealogy game.  And I keep on searching. 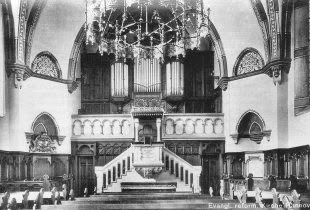 Interior of the Reformed Church.  Many of our Berneburg relatives would have been baptized there.