It's interesting how certain talents get passed down through a family; music was a very important part of life in my family, and I can trace the progression at least back through my grandmother, my father, my siblings and me, and my son and his cousins.

Though she didn't do it often, my Grandmother Ortman played the piano beautifully, in that kind of old-timey, Scott Joplin kind of way.  I guess she must have felt unfulfilled as a musician/performer, because I'm positive that she was the "stage mother" that got my dad into show biz when he was just a little child.

Grandma had clearly had a lot of training in her youth --  you didn't just sit down and start playing that kind of music -- but as far as my father was concerned, he was completely untrained and couldn't even read music.  When he had to sing in church or at a wedding or other affair, he'd have my mother or the church organist play the part for him and learn it that way.  He played the piano by ear, but really the only thing he knew how to play was "Tenderly," and we heard it many, many times. 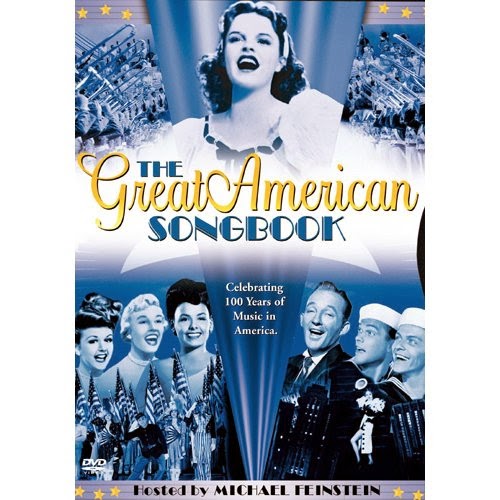 DVD cover art,  From Judy and Bing to Ayler and Shepp, PBS


I will always be grateful for the fact that my upbringing introduced me to "The Great American Songbook," those wonderful songs written between 1920 and 1950, for the most part.  We would sing along with the radio in the car, or of course with Mitch Miller on tv,following the bouncing ball.

All of us kids were very musical -- and we all sang in the church choir, along with our mom and dad, entertained at various church functions and in talent shows at school, but again, we were pretty untrained.  I took piano lessons briefly when I was six, but experienced nothing but frustration because the teacher expected me to play the way SHE wanted, not the way I wanted.  I did learn to read music, sort of, but I also would get my mom to play the music for me (like father, like daughter), and I'd learn it that way.  I remember at least one recital, but I bailed out about as soon as I could.  To this day, I love to play the piano but play it very poorly, so I play on an electronic piano with headphones on so no one can hear.  Yes, I regret quitting, as we all do, but that's the way it went.

When my son was little, it became clear that he had musical talent, too.  I was determined that he should get a good music education, so when his Montessori school had a piano teacher coming to teach once a week, we signed him up.  I would sit and listen to the lesson and just be in agony -- play this note not that note, hold your fingers just so, no, no. no . . . I couldn't stand it.  It's just my opinion, but I think 6-year-olds are too young to play in a regimented way.

One day at school I was having lunch with a colleague, Dee Spencer, who was a Professor of Jazz and 20th Century Music.  I was complaining to her about the teacher Devin had, and asked her if she knew of anyone that would have a different style of teaching.  After talking for a while, she said that *she* would teach him, and I was ecstatic.  The two years he spent with Dee set the stage for his whole music career.  She let him experiment and play, as well as learn the basics, introduced him to a synthesizer, and fostered his love of music instead of squashing it like a bug. 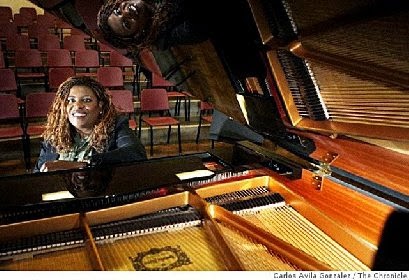 When he was in 5th or 6th grade, he decided he wanted to play the saxophone, and we set him up with a former student of Dee's who followed the same principles -- support the love for the music, and the technique will follow.  By the time he was out of his teens, he'd done various summer programs, Stanford Jazz Camp three times, spent a summer at the California State Summer School of the Arts, and was an excellent musician in every way.

I have to say that nurturing my son's musical talent was one of the most satisfying things I ever did as a parent.  One day when he was in his late teens, I heard him playing the keyboard in his room, and after not having taken a piano lesson since 3rd grade, he was playing a transcription of Ellington's "Lush Life," note for note.  Once he'd had a solid foundation, he taught himself to become an amazing pianist.

One of the great sadnesses of my life is that my dad didn't live long enough to see the flowering of Devin's talent -- that would have made him so happy and proud.  I'll just have to be proud enough for the both of us.