July 23, 2014
In a recent post, I asked about the strategies others use for creating a story from a small number of facts you have for a particular ancestor or ancestral line.  A number of people recommended making a timeline, which is something I haven't done.  So to get a running start with my 39 new ancestors, I'll start with the earliest one and go down his particular line.  (Feel free to skip down to the table at the bottom.)

In about 1630, his son, Christoffer von Glaan, is born in Vollersode, Kirchspiel Hambergen.  No mother is recorded, and a note says Gerdt von Glaan (age32) was not married or his marriage was unknown.

1691, Christoffer von Glaan is on a militia list; he is 60 years old and identified as a "Halbbau."

November 7, 1709, 32-year-old Anna von Glaan marries Harm Jachens (also 32) in Lesum, St. Martini.  The family has moved to where it will reside for many years. 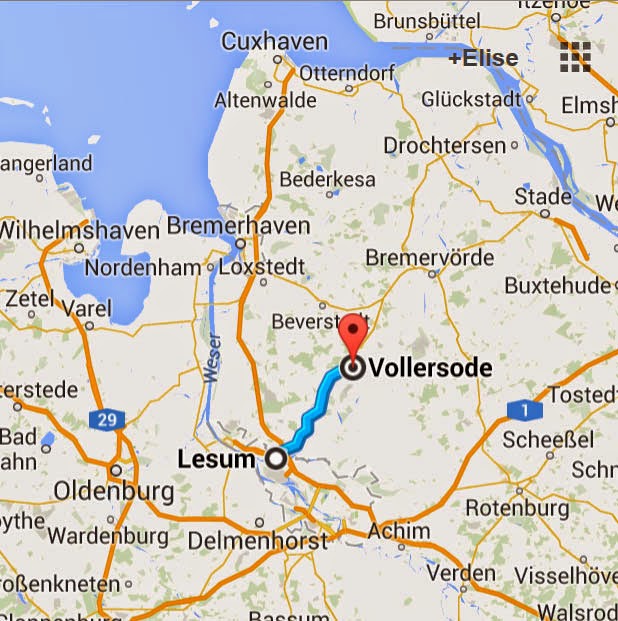 3 August 1737  Anna Jachens is born, daughter of Heilwig and Dierich

About 1767, Adelheit Anna Wellbrock is born

About 1800, Anna Margrete Otten is born to Adelheit Anna Wellbrock and Johann Harm Otten; they never married but had three children.


So what does all this mean?  At first, I'm not sure; it's just a bunch of names and dates.  Then I tried plotting it out as a chart: 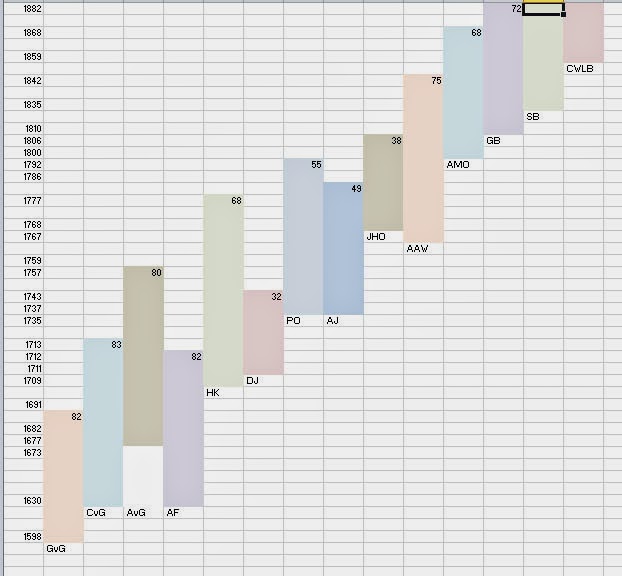 It's a little wonky, but still good enough.  Eight out of 12 ancestors made it to the age of 65 or older -- that's pretty good, and it flies in the face of our notion that people in the olden days died young.  Not in my family!  I also see that except for a move at one point of about 17 miles, this branch of the family stayed put for almost 200 years -- Christiane W.L. Schulze did move away to Bremerhaven, probably in the 1870's or so, but up until then, they were farmers and they stuck to their land.

So now where to?  I'm going to stop and ask for advice.  What would you make of such a timeline?