July 26, 2014
The Sieglers are a relatively short branch on our family tree, but we're hoping to extend it soon.  Here's their history so far:

So Mary/Maria/May/Mae Siegler was Grandpa Bill Ortman's mother.  Her father was George Siegler, who was the first one to come to the United States; his birthplace was in Lohr, Bavaria, Germany.  His father was Nikolaus Siegler, who was born in 1825, and his father was Balthasar Siegler, birth date unknown but likely in the 1700's.

What does the name "Siegler" mean?  According to the Dictionary of Family Names, it means "occupational name for a maker of seals and signet rings, or for an official keeper of a seal, from an agent derivative of Middle High German sigel ‘seal’."  So the name "Siegler" is an occupational one; originally, the "Siegelbeampter" in Germany was a person attached to a royal house who was responsible for having papers signed and then giving them the official seal.

Our Sieglers originated in Lohr, Bavaria.   The next picture shows the distribution of the name "Siegler" within Germany, and Lohr is just about at the place where the darkest red is shown, which indicates the highest concentration of Sieglers in that area. 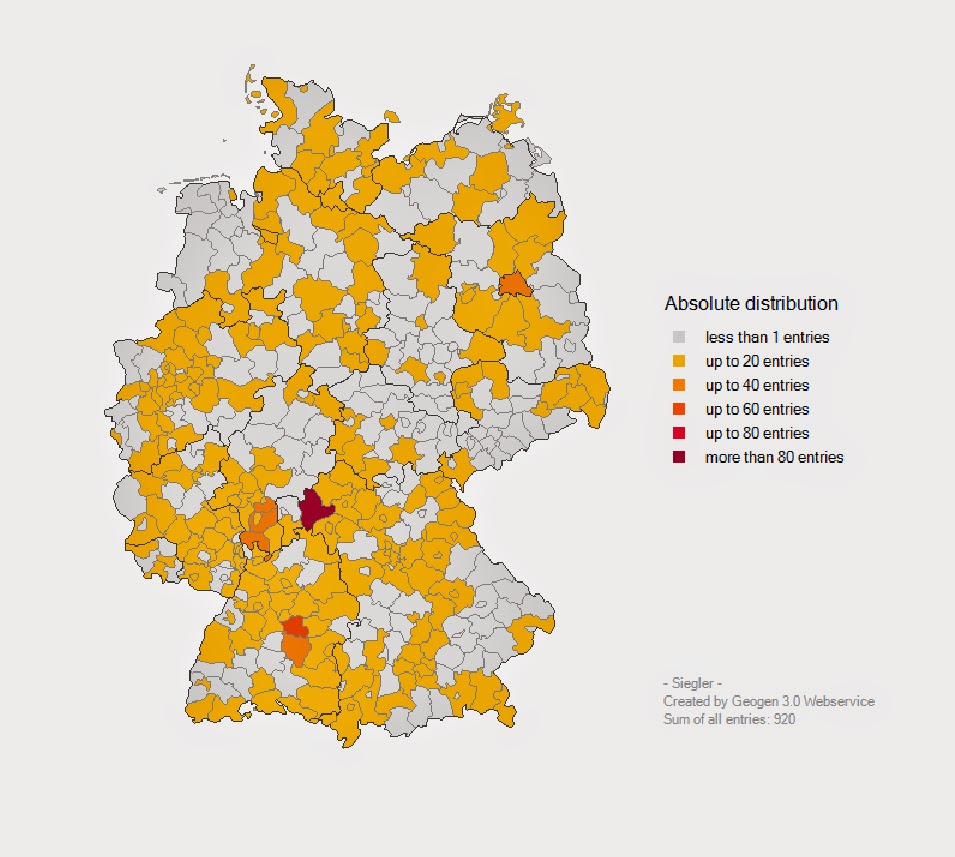 What were the occupations of "our" Sieglers?  George, who came here while still a teenager, worked at various jobs; Grandma Ortman always said he was a barber, and indeed, the 1900 census confirms that.  He also worked as an enamel inspector, a porter, and an "assorter" in a factory.  George's father, Nikolaus, was a stone mason in Lohr, and of Balthasar, we don't know.  We do know that the father of the woman who married Nikolaus was a stone mason, so perhaps Balthasar was as well.

Siegler has many variations as far as spelling goes:  Sigler, Siegeler, Ziegler, and so on.

Just as an aside, I love the name "Balthasar." It was the name of one of the Magi who visited Jesus in the manger, and it means "Protect the King."  Nice name, right?
#family history #geneabloggers #genealogy #surnames #surnames Saturday Siegler