August 23, 2014
In a little more than a week, I've spent 11 hours at the Family History Center looking at microfilms from the Catholic church in Oberglogau (Glogowek), Silesia.  I've come up with about 12 different Langer families, and while I don't yet have them connected so that I know who is who's brother and which kids are cousins, I think I have definitely identified the family of my great-grandfather, Maximilian Langer.

As I mentioned in another post, I went through the birth records -- at this point, from 1774 to 1839 -- looking for Langer births.  Then I went through the marriage records, and while I didn't find all the wedding records, I did find a couple.  But the matched-up families are the most helpful.

Here are my notes: 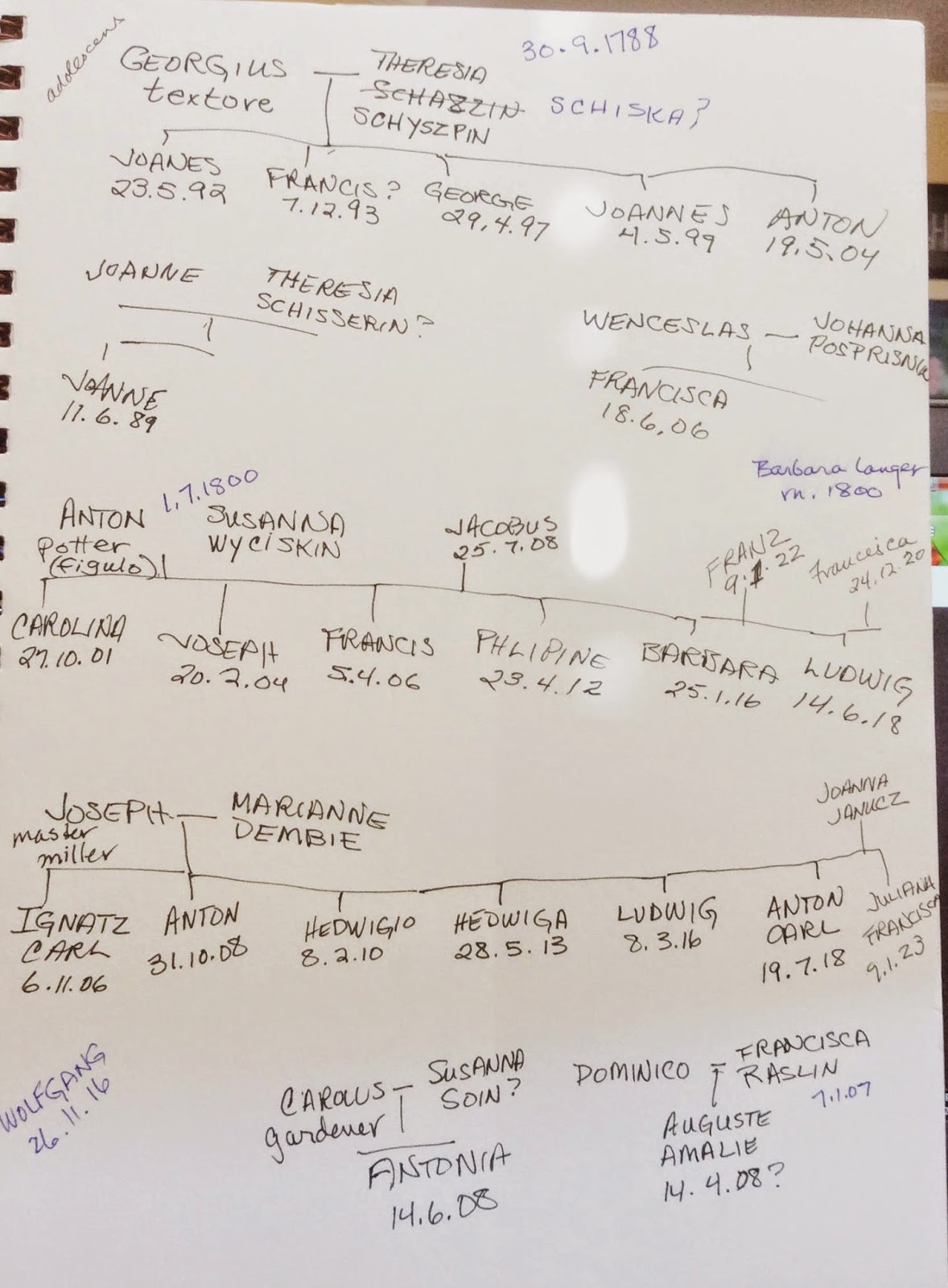 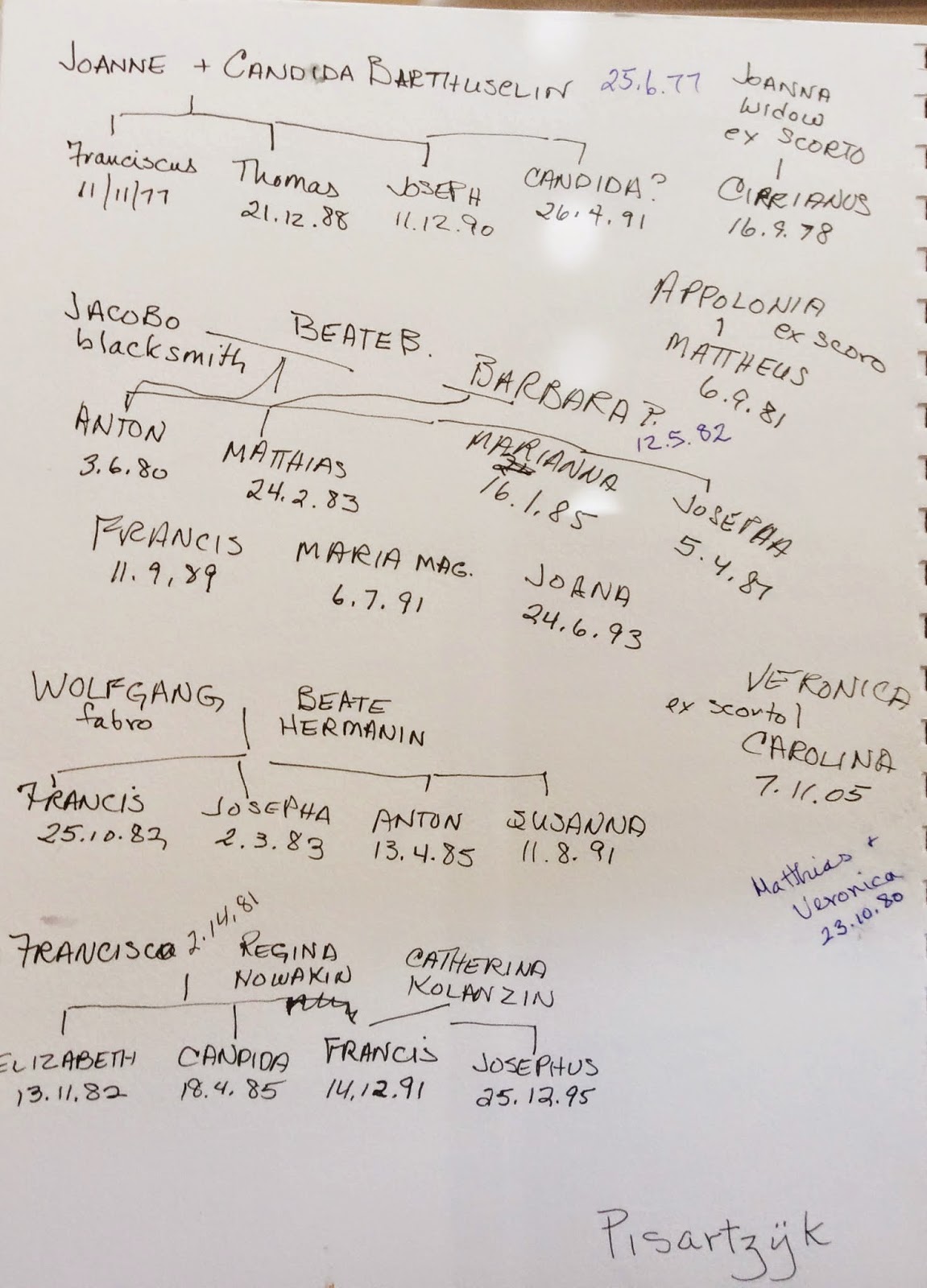 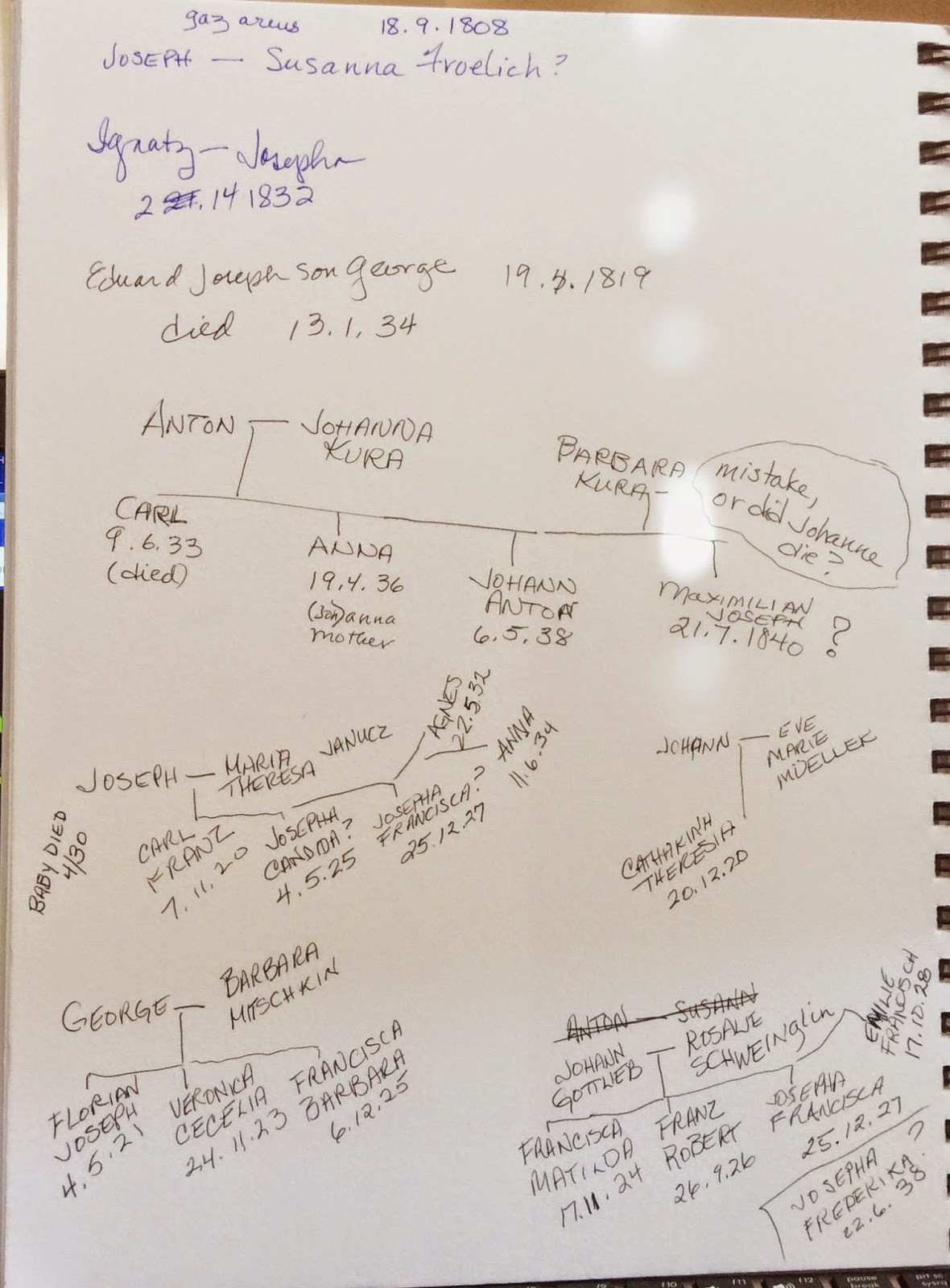 Many notes on many people!  In the middle of the third page is Maximilian's family: 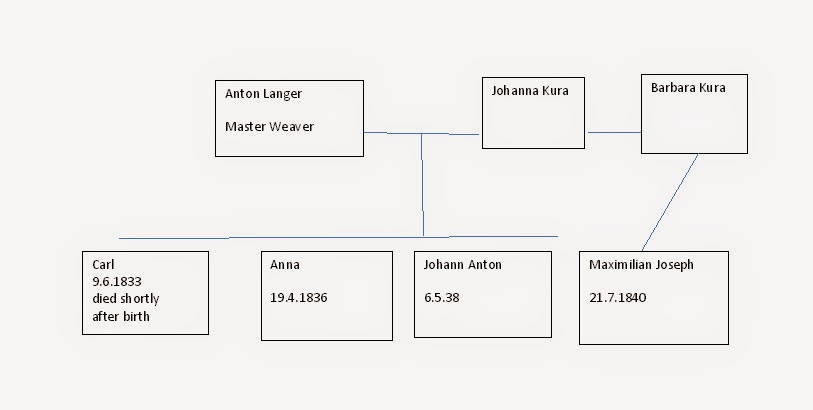 I'm positive that this is the correct family unit, because on Maximilian's death certificate, his father is listed as "Anton, Master Weaver," and this Anton is identified as a master weaver.  There's one puzzle in here that I hope to solve by looking at death records and a few more birth records -- the mother of the first three children is 1)  Johanna, 2) Anna, and 3) Johanna.  I'm going to take a wild guess and say that those are all the same person; surely Anna could be a nickname for Johanna, or a mis-hearing on the part of the priest.  But Maximilian's birth record states that his mother was Barbara Kura, not Johanna.  This could be a mistake, or Johanna could have died -- it was common at the time, if a wife died, for the man to marry her sister.  I'll look further at the birth records to see if Anton and Johanna or Barbara had any more children after Max, and I'll also look at the death records to see if Johanna did pass away.

So which of the families in my notes is Anton's birth family?  That's a good question.  Let's just take as a starting place the fact that his first child, Carl, was born in 1833.  If we guess that Anton was the typical age of between 20 and 30 when he married, we have several possibilities:

#3 seems unlikely, because of the age Anton would have been when Carl was born.  #1 is certainly possible, as is #2.  #2 is odd, though, because the same parents as #3 had two sons born 10 years apart, both named Anton.  While this is not terribly unusual, it could mean that the Anton born in 1808 died at a younger age.  Which do we choose?  I can't make a definite decision until I finish with all the records, but I'm going with #1 at this point, because George Langer was a weaver.  Would it make sense that his sons would go into the family business?  At the same time, this Anton was the last of five boys, not the first -- would the youngest son go into the family business?  I'm reading up on guilds to try to find out.