September 11, 2014
I don't want to write this, I really don't.  It's been 13 years, but in some ways it's as real as if it happened yesterday.  That's the way it is with life-changing events.  But in the interest of recording historical events that have happened in my lifetime, I will.

We were living in California, not far from San Francisco.  My son was getting ready to go to high school; I went to the bottom of the stairs to ask if he was ready, and he said, "Mom!  Somebody flew a plane into the Twin Towers!"  The person he car-pooled with had called to say she wasn't going to school and had given him the news.

It was so hard to even understand what I was hearing.  "What?  What??" was all I could say.  We turned the television on, and indeed, it was true.  Even though the events in New York had begun to unfold about an hour and a half earlier, watching the footage on the news felt as if we were watching it live.  We did catch up with them on live tv about the time the South Tower collapsed.

It was almost impossible to comprehend.  How could this happen?  And how could it happen with four planes, two in New York, one in Washington, and one in Pennsylvania?   Who would do such an unimaginable thing?  Why?  What was happening to the people in the buildings, especially the ones on the upper floors?  We were glued to the tv all day, arms around each other on the couch, looking for answers to our endless questions.  And I felt as I had when my son was born -- I so wished I could have protected him from knowing the many ways that humans can behave in a completely inhumane way toward others.

That day and the days that followed were almost more than we Americans could endure -- of course the people in New York, Washington and Pennsylvania, in Boston and New Jersey, where three of the ill-fated planes originated, but also everyone from coast to coast, any American anywhere.  The searing pain of learning that people on the flights and in the upper floors of the towers were talking to their loved ones on cell phones, saying goodbye.  The horror of knowing that people were driven to jumping out of the towers rather than endure a fiery death.  The unbelievable bravery of the people on Flight 93, trying to take back the plane from the hijackers.  The stunning heroism of firefighters, of police, of police dogs, of ordinary people, risking their lives (and some losing them) to save others.

It was all too much, yet somehow we pulled together.  It's sad to say that at a difficult time like 9/11, people can feel so much closer than they do under ordinary circumstances.  I remember that a few days after the attack, I was teaching in a classroom whose windows looked out on the street.  At one point, a fire truck came down the street and stopped outside our windows in traffic.  We waved at them, they waved back, then the whole class stood up and cheered (including me). 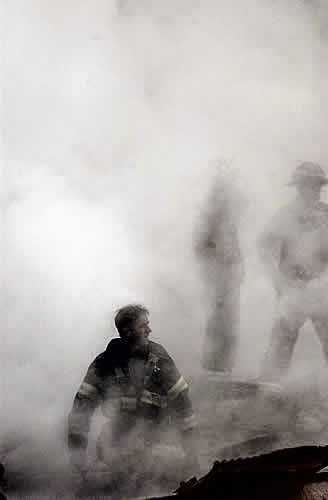 In one of my classes, I had a Muslim student who wore the hijab, the traditional Muslim headdress.  She got in touch with me early on and said she wouldn't be coming to class because she was afraid.  I said I understood, and she should come back when she felt comfortable.  She did come back the following week, but was very quiet.  At one point I must have said something that affected her emotionally, because all of a sudden silent tears were rolling down her face.  An older woman who sat  next to her at the table moved her chair closer and put her arm around the student and they sat like that for a while, and it was better.

Saddest of all were the boards that sprang up around the WTC, messages posted by people who were looking for their loved ones or any information about their loved ones.  Such poignant messages of hope, in many cases unrealistic hope -- 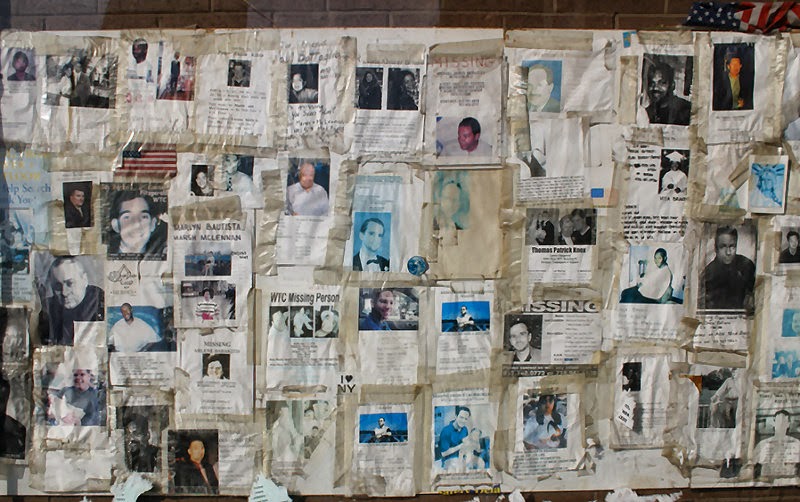 Here we are, 13 years later, and what has changed or been resolved?  We have more and more airport security; Muslims have faced bigotry and discrimination; we've found out that some of the heroes were not so heroic after all; we went into a war that made no sense (and we seem to be at war still, to this day); the government has not been as active as it should have been in taking care of those physically affected by the disaster, and so on.

Still, it was a moment when everything changed.  None of us will ever be the same as we were on 9/10/2001.  Have we learned from it?  Are we better, more united than before?  The questions remain.