September 03, 2014
The other day, Valerie Hughes challenged fellow bloggers to write about the historical events in their lives.  She wrote about having lived through the assassination of John F. Kennedy, and I would like to write about that, too. 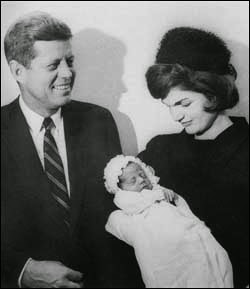 John and Jaqueline Kennedy with their son, JFK Jr.

It's hard to describe at this point how exciting it was for the country to have a president like JFK.  He was young, he had small children -- I guess the comparison is to the first time Barack Obama was elected president.  So many people were happy, but in JFK's case it was liberals, Democrats, and the many, many Catholics in the country, some of whom have a portrait of JFK on their living room wall to this day.

They were a beautiful couple, John and Jackie -- they seemed to live an enchanted life, she was popular all over the world, and he was so obviously proud of her.  Following the Mamie Eisenhower years, she was a gorgeous breath of fresh air, and the two of them were impossibly glamorous. 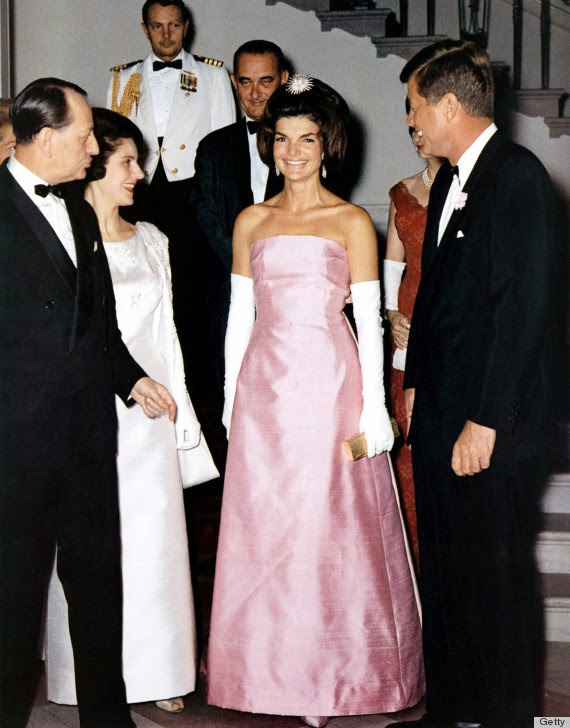 He was a president who cared about people, too, about civil rights and serving your country and making people proud of our country.  Their magical sphere was called "Camelot," and like the characters in the play that was popular at the time, they seemed to live a charmed life.

That all came to a halt on Friday, November 22, 1963, in Dallas, Texas.  I was in 9th grade, and the announcement came as my German class was heading down the stairs to the language lab.  We stopped on the steps to listen to the principal telling us the news of the shooting, which was as shocking as anything we could have imagined.  Having heard the news, we continued down the steps to the language lab and sat silently in our carrels, waiting for more word, which finally came -- our president was dead.

If you lived through 9/11, you can imagine what the following weekend was like -- everyone glued to the tv, endless news reports, gleaning any little crumb we could about what happened, then the horrible shooting of Lee Harvey Oswald, and that sort of heavy feeling you get in your eyes when you've been crying too long over a period of days --   And the poignant things that tore your heart out, little John-John saluting as his father's coffin went by, the riderless horse with the boots turned backwards, Walter Cronkite, our rock in the bringing us the news, in tears. 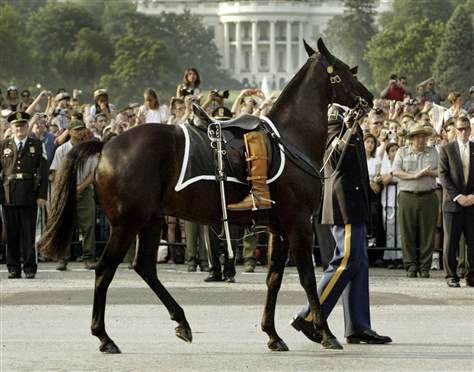 Camelot ended badly, too, with Arthur dead, killed by his own son, with Guinevere in a convent and Lancelot with a broken heart.  The beautiful dream fell apart, just as the dream of Kennedy's Camelot did, not just because of his literal assassination but also because of the assassination of his character in the years since.  We've learned about his illness, his affairs, especially with Marilyn Monroe, and all the other unsavory things we learned about JFK, about his brother Robert, and even about Jackie, who chose not to remain the grieving widow but to marry a billionaire frog prince and left the public eye completely.  And of course, I'm painting a very romantic picture here -- there were many in America who didn't vote for him, didn't care for him as a president, but I have to guess that few of them would have wished him dead.  Have the intervening years diminished him as a president, as a man?  I guess so, but I still remember the man we looked up to and wanted to emulate.

This connects to genealogy too (doesn't everything?).  When I envisioned my ancestors, I imagined, well, I'm not sure what.  People that were larger than life, that practiced good work in their communities, that left a significant mark on the world.  But I've found family of day-laborers and lowly workers, a great-grandfather who spent his last days in a "lunatic asylum" (that's what it was called at the time), a great-grandmother (and her mother and her mother) who was illegitimate, and so on. Does that change things?  No -- it humanizes them.  No one has the perfect family; we all have our troubles and challenges, only most in the public eye work hard to keep them private.  Those of us who go digging into the past are bound to turn over a few shovelfuls of worms.

We can't help loving them, despite their faults, whether it's crazy great-uncle Elmer or JFK.  And we continue digging, hoping to find gold but being just as happy with the occasional worm.

Where were you when you learned about JFK?