Another day in beautiful Ferrara.  If you ever have the opportunity to come here, you should.  It’s a lovely town, very Italian, with many things to see and friendly people.  It has one of the oldest universities in Europe, and both Copernicus and Paracelsus studied there.  Some thoughts from today: 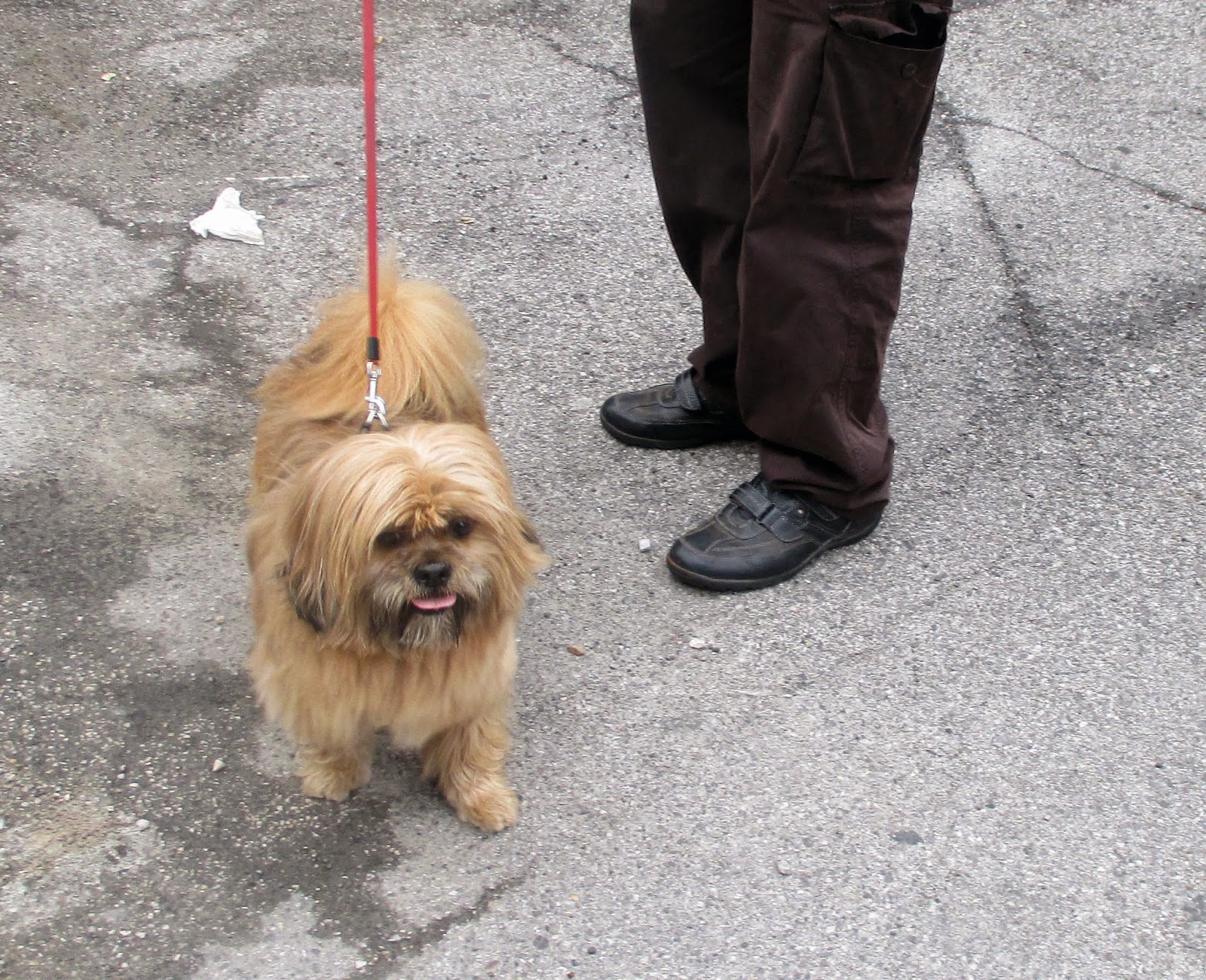 1.  Dogs:  I’ve been wanting to write about dogs since Venice but only today was able to get a couple of pictures to illustrate what I’m talking about.  The Italians love their dogs, and there are plenty of them everywhere you look (including inside restaurants).  The thing about the dogs is . . . they don’t look like American dogs.  I know that sounds strange, but when I mentioned it, Ed immediately understood what I was talking about.  Maybe the breeds are slightly different?  I don’t know, but it has been striking me odd the whole time we’ve been here.  I’m not saying they should look like American dogs; it’s just strange.  The males are often looking for a fight, because none that we can see are neutered.  One of the funniest things we’ve seen was in Venice:  an older man was walking across the Piazza with two bulldog-looking dogs.  We couldn’t figure out why he was holding his arms straight out from his sides as he walked, until we realized that the dogs were trying to fight with each other, and he had to keep them as far apart as he could.   It was a strange way to have to take dogs for a walk! 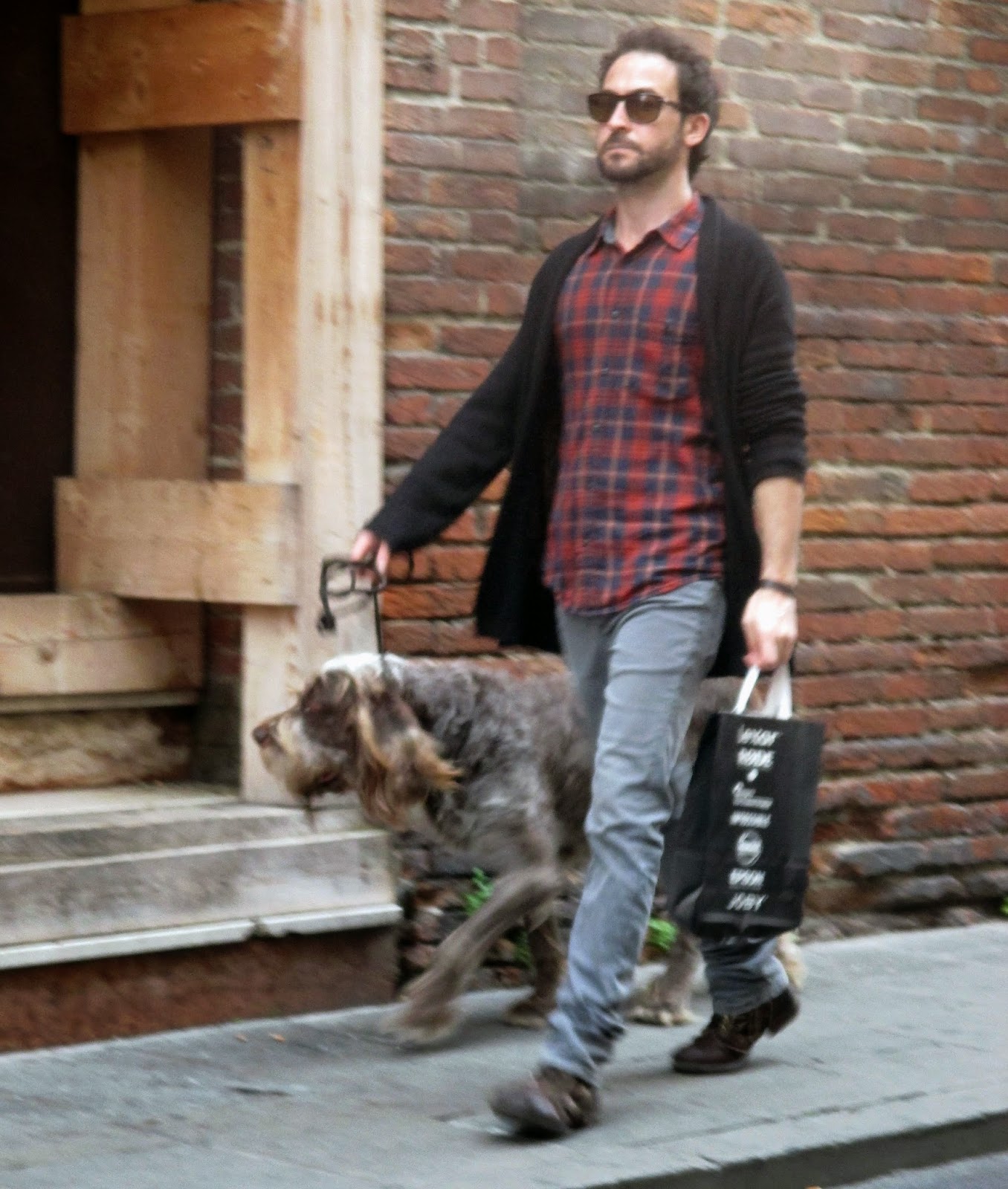 And this really doesn't look like an American dog!


2.  Maps and people:  I think that after negotiating Venice, we thought Ferrara would be easy, so we headed out last night without a map to find the restaurant Osteria del Babbuino (baboon).   It appeared to be so simple:  one long block down to Via Spadari, turn left, then turn right on Via Conchi.  Easier said than done.  No street sign to tell us we were at either street;  we did turn correctly onto Via Spadari but Via Conchi was nowhere to be found.  We walked a couple blocks further, then finally asked a couple where the restaurant might be.  They spoke no English, they started arguing about where it was, and the woman was gesturing in the direction of the Duomo, which I knew couldn't be right.  Then another couple with a stroller and a baby stopped, and while they didn't speak English either, they began gesturing in the right direction.  We were trying to get the steps they were telling us, but we must have looked so puzzled that they finally said, okay, we'll take you there.  Follow us.  We protested because it was the opposite direction from where they were going, but they insisted, so we followed them back for several blocks, right to the restaurant.  They were so nice!  And that is what we have found -- Italian people are extremely helpful and friendly. 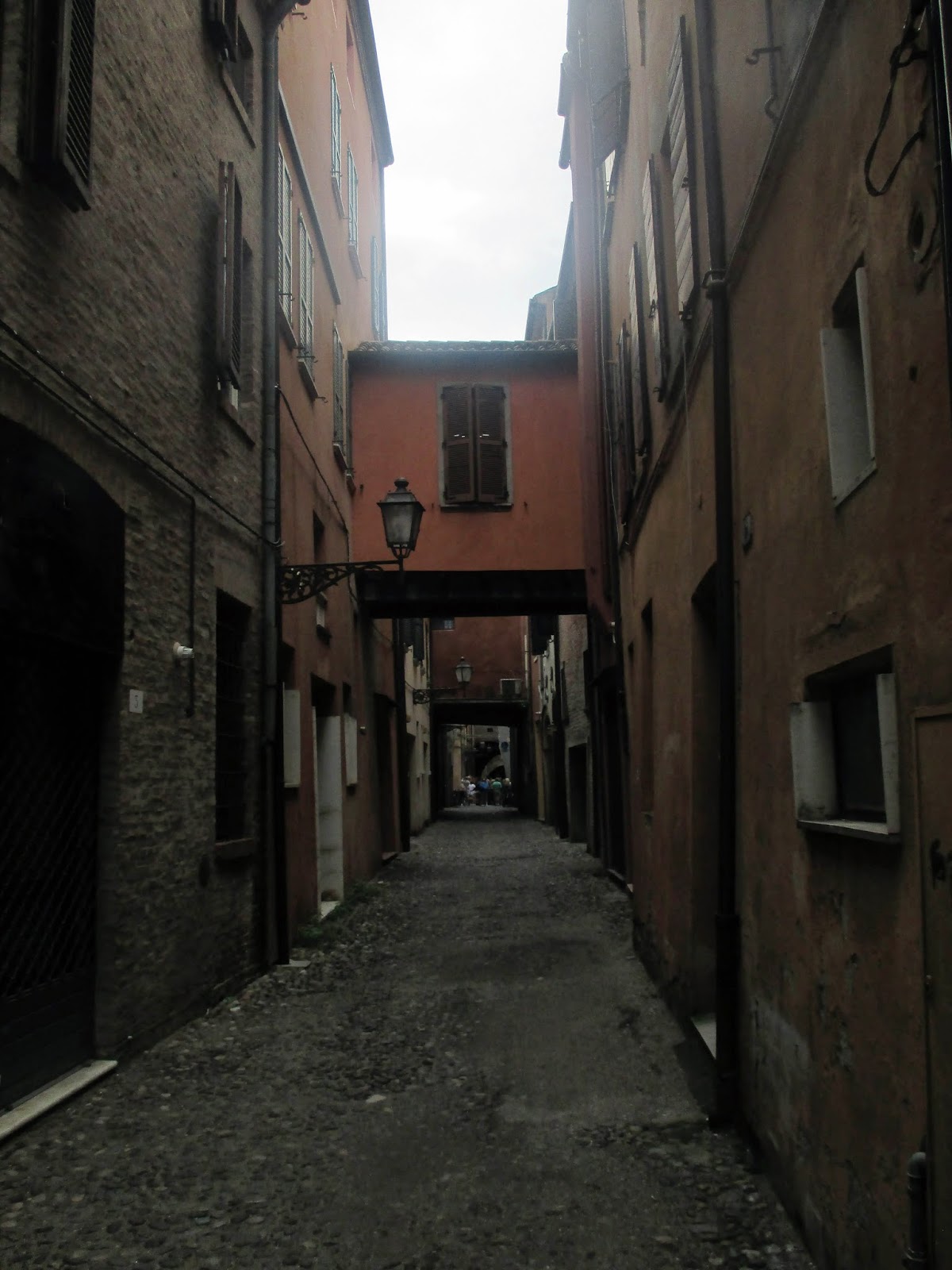 A view of Via delle Volte

3.   Today we took off to find the truly medieval part of town, the Via delle Volte in particular.  This is the most perfectly preserved medieval street in all of Europe.  It was so interesting, kind of dark and gloomy, with arches over the street at many points.  The street itself was treacherous, full of rounded stones that in a rain storm could be lethal.  We really enjoyed walking a couple of blocks down this street.  I heard a man saying that in the States, we think it's great if a building stands 100 years without falling down; Via delle Volte has been standing since the 1200's. 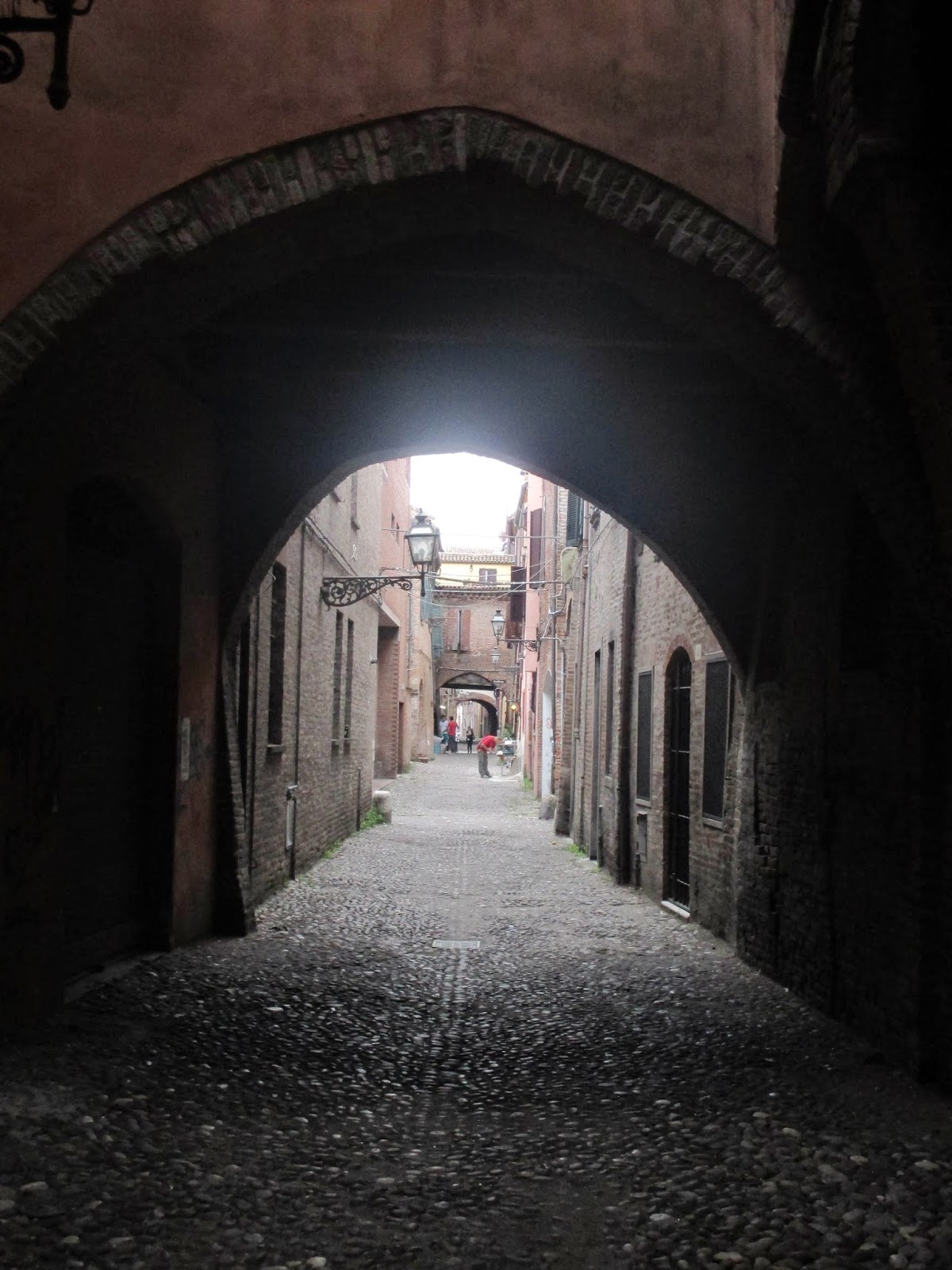 Another view of the Via delle Volte

4.  Language again:  Many fewer people in Ferrara than in Venice speak English, and that can lead to some misunderstandings.  Our dinner last night, while delicious, was delivered all out of order -- the salad we'd wanted to share came at the same time as my entree, and Ed's entree came later.  We got the check instead of the dessert we'd been hoping for.  And while the dessert we finally got was very good, we have no idea of what it was, because we couldn't understand when he described it for us.  Again, at lunch ordering a sandwich, I was happy I caught the word funghi in what he thought we were ordering, because I don't care for mushrooms, generally.  We're learning, though, and today I learned to say "Ciao, tutti" -- goodbye, everyone -- which I think is rather charming. 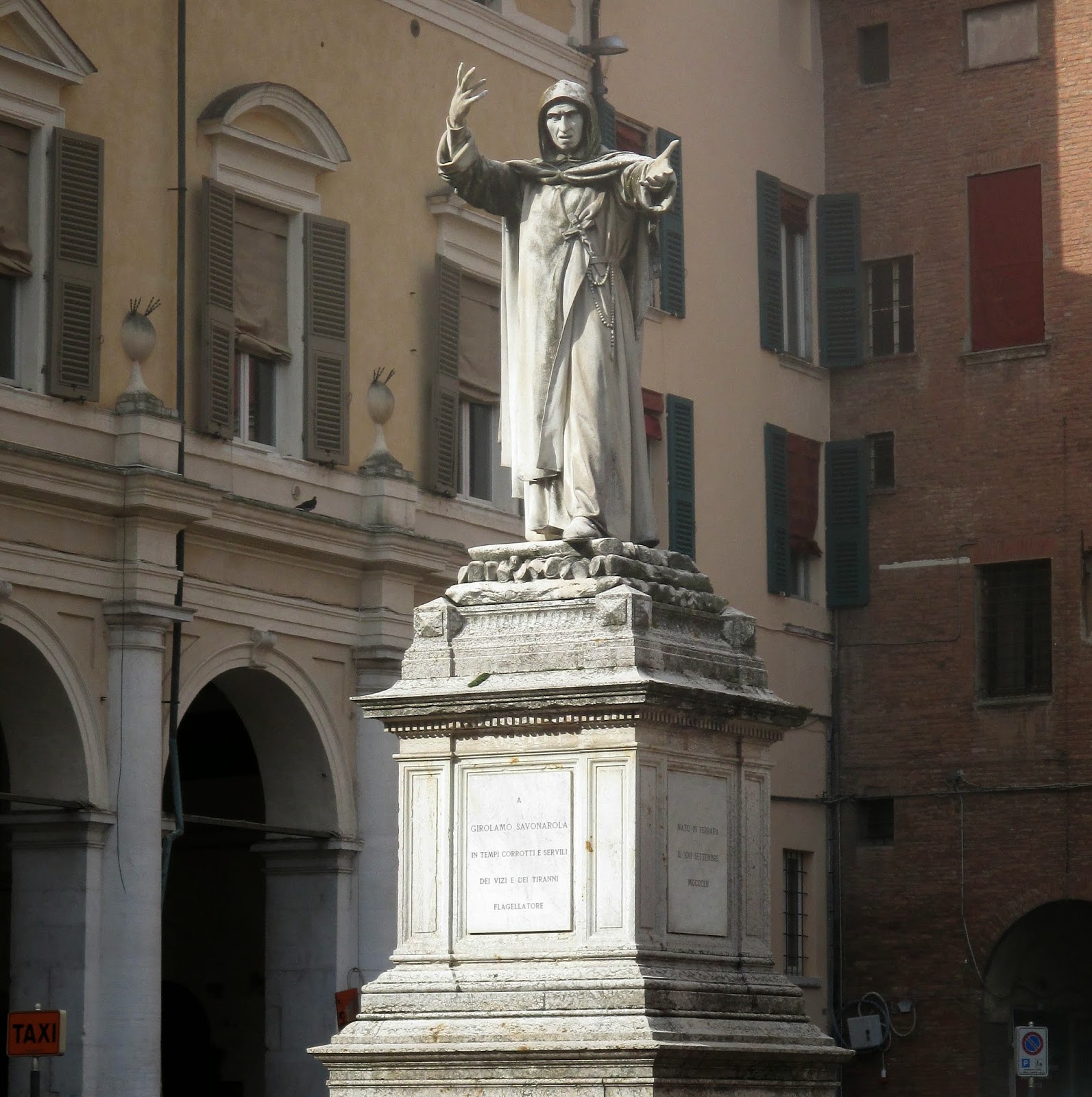 A statue of Savonarola, a native son of Ferrara

I'll leave you with Savonarola for today -- he was a Dominican priest who preached fire and  brimstone about the corruption of the Church, with Pope Alexander VI (Roderigo Borgia) as his main target.  He burned books and destroyed immoral art, along with mirrors, cosmetics, musical instruments and women's hats in what became known as "The Bonfire of the Vanities."  He finally got himself into the leadership position in Florence, in 1494.  By 1497, the Florentines were becoming bored with him and were chafing under his strict leadership, and a group of young men led a revolt that culminated in Savonarola being declared a heretic (by his archenemy, Pope Alexander VI) and burned at the stake.  A powerful but short-lived leader of the Italian people, and the moral of the story is, don't mess around with the Borgias.