January 25, 2015
When I was an academic, I loved the research part of my job.  When winter break or summer would roll around, I was always so happy to turn to "my" work, that of researching literature related to my subject, or topics related to the classes I would be teaching.

Now that I'm retired, this is one of the things that draws me most to genealogy -- the thrill of the chase, the forming of theories that open up new avenues to travel, the very deep satisfaction when something -- anything -- clicks into place, no matter how small.

It's never easy, though, and sometimes you only achieve success by dogged persistence, by plowing through the years and millions of documents, in order to put a coherent story together.

So, today I have a story that, while not yet finished, I'd like to begin to tell, although it's so long that I'll break it into two parts.  I've mentioned before that my paternal grandfather was one of nine siblings who lived to adulthood, and that his marriage to my grandmother caused an estrangement between him and the rest of his family.  I therefore have the eight other brothers and sisters that I know nothing about, but that I would very much like to, not only in the hope of locating those elusive cousins (I've found one so far), but because, well, they're family and I would like to know their stories.

I've told the story of one of the brothers, Herman Henry Ortmann, as far as I could determine it.  Now I would like to relate the story of the next older brother, Joseph.

Joseph Benard Ortmann was born on March 25, 1883, in New York City, the fifth child (second son) of Joseph Ortmann and Anna Schwietering Ortmann.  I assume he was named for his father, Joseph, and his grandfather, Bernard Schwietering.  I don't know how the unusual spelling "Benard" came about, whether it was intentional or a misspelling, but he signed his name that way, as evidenced on his WWI draft registration card: 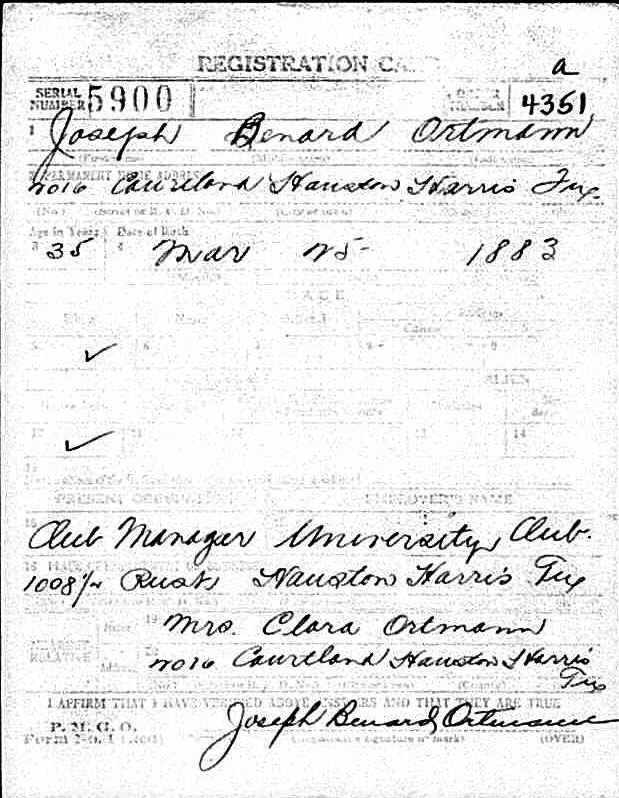 I don't know much about the childhood of the Ortmann children; the house must have been crowded, surely, and they were definitely not well-off.  During the time of his childhood, Joseph's father changed jobs a number of times (finally settling, for a period of time, as a butcher), and the family seemed to move often -- every couple of years.  By the time of the 1900 Census, we find 17-year-old Joseph working as a bottle sorter, but he was ambitious and was seeking other work.  Here's an ad he put in the New York Daily Tribune, on March 20, 1900: 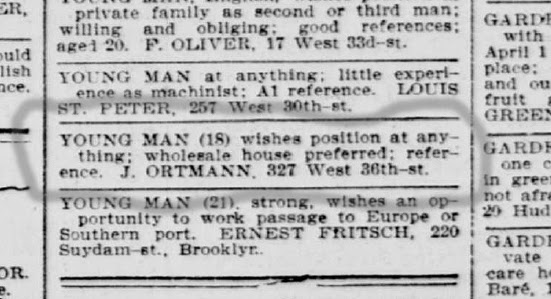 Please note:  He's representing himself as 18, when he won't be 17 for another five days!

He seems to be doing pretty well for himself, if at the age of 17 he already has good references!

Here we lose track of Joseph for a while; he doesn't show up again until the 1910 Census.  At this point, I'd like to leave Joseph for a bit and pick up another thread, that of the two sisters who would each become his wife, Clara and Mabel Manson.

Clara (1882, Texas) and Mabel (1888, Missouri) Manson were born to Frederick L. Manson and Amanda Sells, a somewhat elusive couple that seem to have been on the move in the states of Missouri, Oklahoma, and Texas during the 1880s.  Fred was born in Philadelphia, and Manda in Iowa.  Fred had a military career, which would explain the number of times he moved, and while it's a bit difficult to trace, at this point I'm pretty sure I have at least part of his history down.  I had to separate it from an officer named Frederick L. Munson, who was multiple times transcribed as Manson, although in not one of the many handwritten documents related to him is the "u" in the name closed to form an "a."  It clearly is an "a" in Fred Manson's records.   (Major genealogical frustration.)

We first find Fred enlisting in the Army in Philadelphia, on April 3, 1873, joining what looks like the "Philadelphia 9th."  He spent time at Ft. Clark in Texas (where Clara was born), at Ft. Supply in Oklahoma, and almost surely at Ft. Costilla in Colorado, because one document says he was involved in the "Ute Campaign."   He left Company M of  the 4th U.S. Cavalry in 1878, but appears to have re-upped with Company G of the 4th U.S. Cavalry in 1878 and served with them until 1881.  Much later, he appears in San Francisco working as a clerk and dying there in 1923.  He is buried in the military cemetery.  He left a wife, Elizabeth Manson. 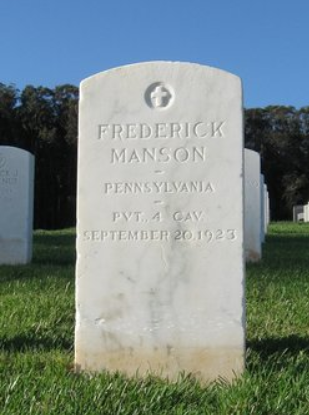 Why is Fred's Indian War service relevant to Clara and Mabel's lives, since Clara was born in 1882?  Because by pinning down the military service of a man named Frederick L. Manson, both before and after the birth of his girls, I can see that in 1892, he abandoned them by putting them into an orphanage, the St. Louis Presbyterian Orphan Asylum, when Clara was 11 (maybe 12) and Mabel was 5.  I can find little information on their mother, Amanda J. Sells, except for an appearance in an 1856 Iowa census with her family, the year she was born, and in the 1880 U.S. census, there's a record of Amanda Manson, age 22, with her daughter, Clara, 9 mos., living in Ft. Costilla, Colorado.  She's listed as married, but without a husband -- Fred was likely off on the Ute Campaign.  And this would make Clara several years older than she later indicated she was, but that's not unusual.  I cannot yet find a death record for Amanda Manson, but I strongly suspect that she died between Mabel's birth in 1888 and when the girls were put in the orphanage in 1892.  But I have found in someone else's family tree undocumented information that she died in Iowa after 1900 -- for this to be true, we'd have to imagine Amanda having some kind of illness or problem that caused her to leave her husband and children and go back home.

So here I am, thinking about Clara and little Mabel having lost their family and been left on their own in an orphanage.  I can't imagine what their life was like in that institution, though I have found out that the St. Louis Presbyterian orphanage was a reputable institution for its day.  I've sent an inquiry about whether I can have access to their files, which would record who checked them in and whether anyone ever came to see them.  I hope I can get access to those records.

Here we also lose the trail of Clara and Mabel for a while, until 1910, when their paths have already crossed with Joseph Ortmann's.  We'll continue the story in Part 2. 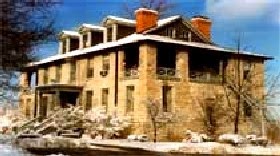