It's been a while!

July 18, 2015
It sure has.  We've had a few challenges, including daughter having eye surgery, which was not fun and which took up a lot of time.  I've also been working on my e-book, making progress there, looking forward to having it done.  Here's a glimpse at the cover: 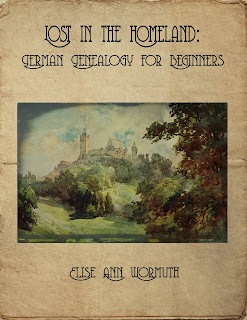 I think it's going to be useful to people, at least I hope it will.  It seems to me that all the Germany guides I've looked at are basically a list of websites and other resources, and while mine will include plenty of those things, it will also include notes on how to use them and cautionary tales and success stories from my own experiences.  I'm excited about it.

I'm also getting ready to go on the FGS Genealogy cruise at the end of August!  I'm taking my sister, and we're both excited.  She's not a genealogist, though she enjoys reading what I've researched, but maybe by the time the ship docks back in Seattle, we will have made one of her.

I'll be checking in more often.  Sometimes you get kind of out of the swing of things, but then, you hope, you'll get back into it again.
#geneabloggers #genealogy alaska e-book FGS cruise geneabloggers