Oh, Annie: Thinking About My Great-Grandmother

August 05, 2015
I've written about my great-grandmother, Annie Schwietering Ortmann, here and here. Today, I've been working on my book (German research for newbies, essentially), and I did an exhaustive search on the Big Three (Ancestry, MyHeritage, and Family Search) for the Ortmann family.  I found some interesting things.

First, we know that as researchers, we have to deal with variations in spelling.  If your ancestor is named Smith or Jones, this might not be much of an issue.  But if your great-grandmother's name was Schwietering, well, here are the variations I've found so far:

If I'm being very conscientious, I'll search for all of these variations any time I search for Annie.  Can you say "tedious"?

More important is that in my searches, I found birth and/or death records for Joseph Ortmann and Annie's children.  Indulge me while I present you with a list: 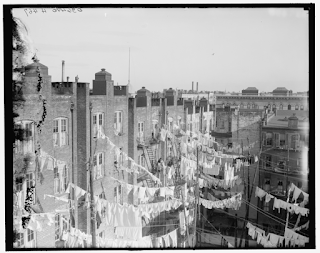 I have a hard time imagining her life with all those children around.  Their children seemed to stay close to home -- in the 1900 census, all nine of the surviving children are living at home, ranging in age from 6 to 24.  The older ones are working, of course, Anna in "passementary" (making trimmings for furniture and clothes); Mary in millinery (women's hats); August works as a shipment clerk; Adelaide is a dressmaker; and Joseph B., age 17, works as a "bottel sorter."  It's hard to imagine that their father, Joseph, could support everyone with his occupation of cabinet maker, so it appears that as soon as the children could work, they did. Also helping out, at the time of the 1900 census, was Annie's brother Herman Schwietering, whose profession as a cabinet maker suggests that he worked with Joseph.  He no doubt contributed part of his earnings to the household. 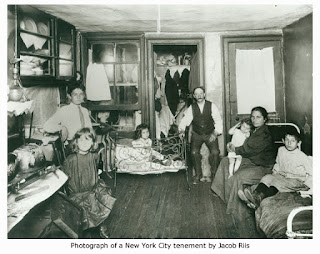 Annie, I so wish I knew more about you.  Was it fine with you that you were basically a baby machine?  (That's harsh, I know.)  Did you ever say "not tonight, Joe"?  Did you have dreams and desires that didn't include being a mother to nine or more children at a time?  That several of your daughters work in sewing related fields suggests that you spent a lot of time sewing and teaching. Living in what must have been a New York tenement, did you ever think about Nienborg, Germany, where you were born?  Did you have anything beautiful, or was your life nothing but drudgery?

Joseph Ortmann died in 1911 at the age of 66; Annie outlived him by many years until her death in 1936 at the age of 80.  She lived with her daughter Anna, who appears never to have left home and who outlived her mother by only seven years.

I like to think that those 25 years after her husband died were quiet ones for Annie; she had Joseph's Civil War pension, and I hope that was sufficient for her to lead a quiet life.  Perhaps she was able to spend time with her grandchildren.

That said, I wonder if she ever met her grandchild, William John Ortman Jr., my dad.  His father was estranged from his family, and I just don't know whether there was ever a moment that the rift was healed.

I would give anything for a photograph of her.  I would love to have known you, Annie Schwietering Ortmann.