Ten foods from my childhood --

October 07, 2015
I just discovered Gina Philibert-Ortega's blog, "Food.  Family.  Ephemera."  Wow, what fun that blog is!  Today, she wrote about baked bean sandwiches, and that triggered such memories for me.

We used to have baked bean sandwiches -- beans on a piece of (white) bread, topped with cheese (Swiss for me), and then broiled until the cheese melted.   You had to eat it with a fork.

This got me started thinking about foods that I enjoyed in my long-ago youth, but don't make any more.  Here are 10 I remember, besides the baked bean sandwiches -- what foods do you remember from your childhood?

1.  "German baby food."  I don't know what else to call this.  My grandmother would make it for us -- spaghetti pasta sautéed in butter with cinnamon and sugar.  Extreme comfort food.

2.  Chow mein -- remember those cans of Chun King chow mein that had the little can of noodles on top?  My grandma would make chow mein from scratch that was so much better than that. 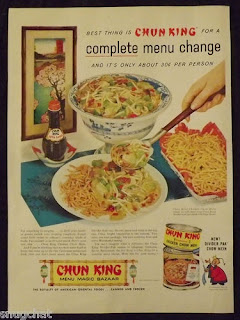 3.  Speaking of those cans of noodles, my mother would make cookies of a sort by pouring melted chocolate over little mounds of the noodles.  I think we called them "bird's nests."

4.  Shrimp dip.  I wish I could find a recipe for the shrimp dip that was popular in the 1950's -- it was delicious and it appeared at every special occasion.  I think it had cream cheese in it.

5.  Rouladen.  Again, Grandma would make this for us -- roll-ups of beef with bacon and onion inside (for those in the know -- NO pickle!).

6.  Fresh pork roast.  Okay, I'm a Midwestern girl; I love my pork roast.  My mother would get one with the rind on it and it would come out all crispy and crunchy.  Of course, we'd never eat that nowadays, would we?

Speaking of roasts, my mother would always put the Sunday dinner roast in the oven before we went to church, and when we came back, the whole house would smell wonderful.  We'd have our Sunday dinner at noontime, and then at suppertime, we'd have sandwiches from the roast in front of the tv while we watched Ed Sullivan or Disney's Wonderful World of Color. 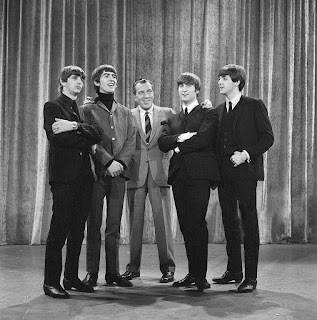 The picture is from one of the best nights of my life.  The Beatles on Ed Sullivan!  I was in love with George, though I can't tell you why.

7.  Green bean casserole.  Okay, people still make this, right?  With the beans and mushroom soup and the crispy onions on the top?  Only now we probably make it with fresh beans instead of canned.

So, green beans.  When I was a kid, I hated green beans.  My mother and I had a showdown once about canned French-cut green beans.  I was going to sit there until I ate them.  Any one else remember that?  I'm sure she won, though I'm also sure I made plenty of dramatic gagging noises as I choked them down.

8.  Liver and onions with spinach.  This was not my favorite meal; it was probably my least favorite one.  Beef liver and spinach from a can.  Ugh!  At least my mother would serve it at the same meal, so we could get it all over with for a while.

9.  Green jello mold.  All my life, I have hated Jello.  I hate the wiggly-ness of it, the way it slides down your throat.  The only time I willingly ate it was after my son was born and I hadn't eaten for about 36 hours -- they served me Jello and I wolfed it down.  But my mom would make a Jello mold that I could tolerate -- the Jello was whipped with something, probably cream cheese again, and it had pineapples in it.  That I would eat.  But not a lot.

10.  Chef BoyArDee pizza.  A big night at our house when we had pizza.  It all came in a kit, the dough, the sauce, the sprinkly cheese.  If we were lucky, Mom added pepperoni.  Those who didn't like their crusts would pass them down the table to Grandma, who thought chewing on them was good for her jaws. 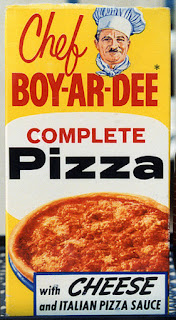 11.  Exotic foods.  I was only going to do 10, but I have to mention artichokes.  Every so often, my mother would bring home an artichoke and we would eat it with drawn butter.  It was so exotic and so elegant and we would all share the one artichoke.  Now I live in artichoke country, and sometimes for the three of us, we get three big ones and call it dinner.  But I won't forget how wonderful those Minnesota artichokes were.

What foods do you remember from your childhood?