Whatever happened to Baby Dorothy?

October 25, 2015
A few years ago, someone told me that if you're stuck on a particular ancestor's story, you should write down everything you know.  I did it for my great-grandfather, Joseph Ortmann, and now I'd like to try it for my paternal grandmother, Mary/Marie/Maria/May/Mae Siegler Ortman (yes, she did use all those variations of her name over her lifetime).

Mary A. Siegler was born on March 23,1895, in Woodhaven, New York; her parents were George Siegler, a barber, and the former Matilda Hug.  In May of 1889, a brother, Nicholas, was born, but unfortunately he lived only a few months, dying in August, 1889.  After many years passed, George and Matilda had another child, Dorothy G. Siegler, in 1912, making a more than 16-year difference between the two sisters (though I remember clearly my grandmother telling me many times it was a 12-year difference -- don't we all shave off a year or two where we can?).

In November, 1916, of course, the United States was gearing up to enter World War I; was Frank going with them?

Nope -- he received a deferment because of "weak lungs."  I'm not sure whether that suggests he was born prematurely or whether he had tuberculosis (a disease that can have long periods of dormancy) or some other cause, but in any case, he stayed home.

Some time in mid-summer 1918, Mary discovered that she was pregnant; on October 18th of that year, Frank died.  Did he succumb to tuberculosis or was he one of the 30,736 people that died of influenza in New York City in the six weeks leading up to a November 1st report?  It wouldn't be surprising for a person with weak lungs become a victim of the terrible influenza epidemic of 1918-1919.

So sadly, Mary was alone, and her daughter was born on April 26, 1919.  Here's where the story becomes a little confusing, at least to other genealogists; because Mary named her baby Dorothy, after her sister, Dorothy Sanger and Dorothy Siegler become confused, and the mistake is perpetuated in a number of family trees.   At the time of Dorothy Sanger's birth, Dorothy Siegler was 7 years old.

Part of the confusion comes from the 1920 United States Census:

We see that Mary has moved back home with George and Matilda; she is listed as Mary Sanger, age 24, a married woman.  But the census taker has made a mistake:  He drew a line where Dorothy's surname was, as he did with Matilda above, and where the line by Matilda suggests her surname is Siegler, the line by Dorothy suggests her name is Sanger, which cannot be the case.  A baby born in 1919 could not be 8 years old, as this Dorothy is, in 1920.  But Dorothy Siegler, who was born in 1912, was indeed 8 years old in 1920, and she was the daughter of George and Matilda, not Mary.

So this begs the question:  Whatever happened to Baby Dorothy?

Would Mary have returned home without her baby?  Did Baby Dorothy die?  I've searched through the Sanger family and haven't found her living with August and Rose, Frank's parents; with Hilda, Frank's sister; or August, Frank's brother.  In fact, in the 1920 Census we find that August Sr. has died, and Rose is living with Hilda and her husband, William Huebner, and August and his wife, Margaret.  No Baby Dorothy living with them.

So I don't know.  I can search for a death certificate.  But there are a couple of other tantalizing things about this story.

When my grandmother returned home, she appears to have dropped the name Sanger, at least informally (it appears on her later Social Security application, though).  But later in 1920, her engagement to my grandfather was announced in the local paper: 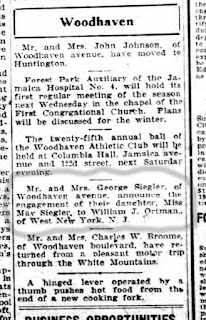 Notice her name:  Miss May Siegler, not Mrs. Frank Sanger, widow.  Did she want to erase the traces of her previous marriage (and child)?  Did my grandfather know she'd previously been married, or was it a secret kept within the Siegler family?  Did my father know he had an older half-sister?  William and Mary never had any children other than my father, so he grew up without siblings.  William J. Ortman and Mary (Mae) Siegler were married on June 29, 1921.

One more possibility which, though an extremely long shot, might explain a few things.  In the 1920 Census, I do find an 8 month old Dorothy Sanger:

This Dorothy is living with Nathan and Rose Sanger, their only child.  Notice that these Sangers emigrated from Austria (August and Rose were from Germany), and that their native language was . . . Yiddish.  Could these two Sanger families be related?  Could Frank Sanger's family have converted to Christianity somewhere along the way?  (August Sr.'s obituary indicates that he was Catholic.)  Could Mary's family have tried to keep this secret, that her daughter was growing up in a Jewish household?

Our family lore says that at the time of his marriage, William John Ortman was disowned by his family, the story holding that their union was unacceptable because Mary was Lutheran and William was Catholic.  What if the secret got out, that Mary had married into a formerly Jewish family and that her daughter was being raised in that faith?  Could the shameful anti-Semitism of the day have been the cause of that rupture, one that was never healed?  My grandfather never spoke to his parents or his eight siblings again.  That seems rather extreme for a Lutheran/Catholic union, especially when I see evidence in other branches of my tree that ancestors of different Christian faiths intermarried.

What are my next steps, to try to find Baby Dorothy?

1.  Search New York death records for 1919.  Dorothy was born in April, the census taken in January, so that narrows it down a bit.

2.  Keep looking for a connection between August Sanger and Nathan Sanger, through other family trees or by going back a generation or more in records.

I may never have the answer to all of my questions, and that's one of the very frustrating things about genealogy -- there are some things that  you will just never, ever know.  But the search can still be worthwhile.

*For the purposes of this blog post, because there are living members of the family, I have given Frank a pseudonym.