1.  Last night we ate at a very good Italian restaurant, Picolla Strada.  It's very small, with room for maybe 7 parties of various sizes.  There appeared to be only the owners, an Italian couple, running the place, with maybe a daughter taking an order here and there.  They had quite an extensive menu for such a small place, including two prix fixes dinners (14.50 and 17.50 Euros) and many a la carte choices.  We dined fairly simply, with Ed and I choosing a prix fixe with appetizer, entree and dessert.  Grace and Deb chose pesto pasta and ravioli in cream sauce.  My appetizer was called "Salade Tiede," which, because I hadn't translated it, left me surprised when my salad arrived in a hot, rather than cold condition ("tiede" turns out to mean "lukewarm").  It was delicious, as was the linguini Aglio Et Olio Ed and I ordered.  While it was not as heavenly as the dish made for us in Ferrara, Italy, by a Michelin star chef, it was excellent and we enjoyed it greatly. 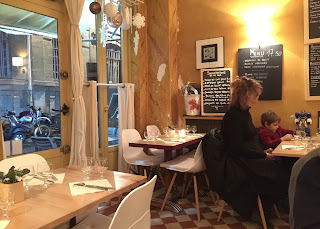 The cheery interior of Picolla Strada

This very nice meal got me thinking about the kinds of reviews you read on TripAdvisor or Yelp.  Piccolo Strada has earned a solid 3.5 on TripAdvisor, with the main complaints being the service and the small portions and hence poor value.  We disagreed with all these perspectives -- the server/owner was very helpful and efficient, the price was good, and the amount of food left us stuffed to the gills!  For a neighborhood restaurant not filled with tourists, it was excellent.  Sure, a restaurant or owner or server will have a bad night, but I think that some people just have unforgiving expectations or are just crabby and difficult people themselves.

I've noticed that many restaurants have a few people hanging around outside the kitchen that reviewers sometimes complain about -- the waitress was slow, while the "other help" just sat there!  I really don't think that's "other help," in a tiny restaurant, rather friends and relations who hang out in a bar or restaurant in the evening, as a kind of social event.  I've never seen any of those people taking an order or bussing a dish.

2.  The Metro vs. The Taxi.  We've taken the Metro, yes we have, from Barbes-Rochechouart, Anvers, and Abbesses, and we've changed Metro trains and ridden the RER train to Versailles.  We tend, though, once we finish our activity, to hop into a taxi to get home, because we're too tired to brave the stairs, long corridors, confusion (ours) and crowds in the Metro.  Though elevators are advertised, they are hard to find, and Abbesses, for one, has a circular staircase that goes down at least six, maybe eight floors.  I'm not sure how people with serious mobility problems get around.

A taxi for the four of us (three seniors) usually costs between 15-20 Euros, and it makes life so much easier.  It would undoubtedly cost less if we were in a more central location.  We've been calling Taxi Paris G7, which has English-speaking operators and which shows up very quickly, between five and ten minutes.  I've also used their order-ahead service, which I'll use again when Ed and I have to get to Gare du Nord early tomorrow morning or when we have to go to CDG on Wednesday morning.  It costs a little more, but they have shown up exactly on time. 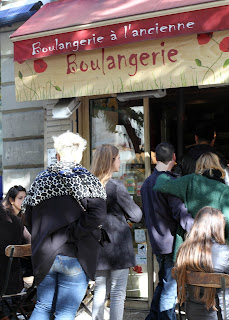 What's interesting, I think, is that the days of taxi drivers taking a very circuitous route in order to get more money are over -- since riders have cell phones with maps and GPS, they can see if a driver is going far off route.  Traffic is circuitous in Paris in any case, with many one-way-streets and no left turns, but every driver we've had has been following GPS and gotten us to exactly where we wanted to go.

3.  We have found French shopkeepers, waiters, and persons-on-the-street to be very kind and helpful; no one has given us a hard time or criticized us for being boorish Americans.  We've tried to use our French where we can, and we're always careful to say "Bonjour," and "Merci," and we've gotten along just fine.

So, off to the Musee D'Orsay this morning.  More to report later, I'm sure.
#geneabloggers #makingfamilyhistory #makingmemories #Paris geneabloggers Montmartre Paris Paris2015