November 15, 2015
Today has been a good day so far.  Montmartre is full of people, smiling and laughing and enjoying the late fall sunshine; we've heard that the weather is more like April than November, so we feel lucky in that.  It's pleasantly cool and sunny.

We began with brunch at Coquelicot, our favorite boulangerie.  We enjoyed tartines, eggs and ham, cappuccinos, and then we decided to head for the Dali museum, the only one we could find open today. 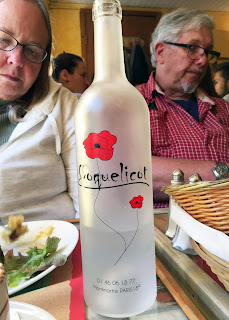 I love their Art Nouveau logo

Now comes the hard question -- how will we get there?  It was a long walk back to the funicular, to get from Abbesses to the top of Montmartre on the Metro you go all over hell and gone, to pick up the little white train we would have had to walk to the Moulin Rouge, a long way in the opposite direction from where we wanted to go.  Maybe there was a bus, but I couldn't figure that one out.

So, only one thing to do, right?  Climb the hill!  This is not as easy as it sounds for us old-and-out-of-shapesters, but guess what?  We did it! 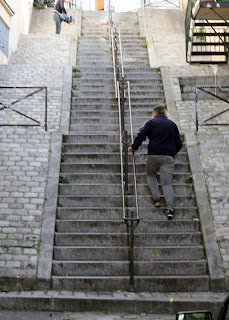 Here's Grace, dashing up the stairs.

It involved a long flight of stairs to start, and then several steep (for us, anyway) streets, but we made it to the Espace Dali without anyone collapsing or just sitting down on the curb and crying (one of us felt like that several times, I'm not saying who).

But we enjoyed the Dali Museum very much -- he's a favorite of Ed's and mine, and they had such interesting pieces.  Here's a picture my sister took: 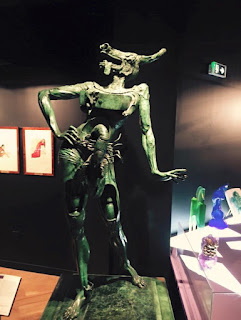 So strange and wonderful.
Then we wandered over to the Place du Tertre again, and today it was full of people, all laughing and talking and enjoying the day.  I think Montmartre was so busy because 1) all the public museums were closed, and 2) it's about as far away as you can be in this direction from where the trouble was.  We found seats at one of the packed cafes and enjoyed cool drinks, and Deb and I shared some glace, which was absolutely wonderful -- kind of like gelato, really.  The strawberry and vanilla were especially good. 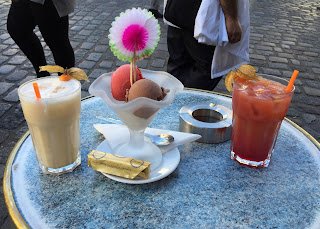 Reward for climbing the hill
Today I encountered one of the "petitioners," a woman who wanted me to sign a petition for a cause for deaf people, and I managed to get her to go away after saying "non" three times.  (I didn't use the more serious expression we all have practiced saying:  Va 'ten, which means "go away.")  I read that if you sign the petition, then they demand money from you, so I managed to avoid that.
On the Place du Tertre, as we people-watched, we were approached every two minutes by artistes wanting to draw or paint our portraits -- silhouettes, caricatures, "I'll make you look happy."   We steadfastly said no thank you.  I loved the look of this silhouette artiste: 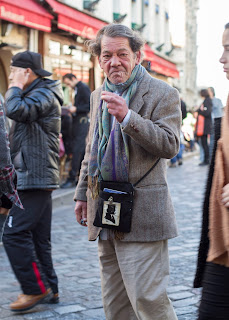 So very French, right?
The particular cafe we went to had the greatest waiter -- he was so charming and funny and enormously energetic. 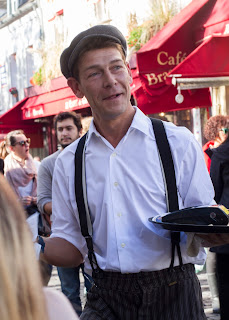 He kept everyone laughing and happy.
Then it was time to wander back down to the apartment to recoup before dinner time.  We passed the famous Montmartre stairs: 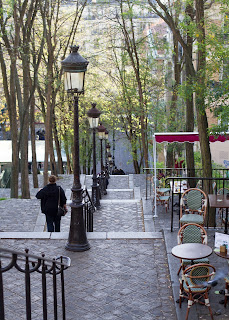 So many beautiful pictures of these stairs --
but opted for the funicular because Deb's knees had about had it.  We tried to buy tickets from a machine, but Ed's debit card didn't work, so we went to the booth, where we encountered the same dour lady we met the other day.  For some reason, she did not want to take a bill, but insisted on having coins -- she wouldn't take a 5 Euro bill for a 3.60 fare, but made us come up with the coins, of which we had few at that point.  Today as we waited in line, there was a huge ruckus with an older couple who were ahead of us.  We think the problem was that they were trying to force a bill on her and she was refusing -- a lot of shouting ensued, they were yelling at her in a language other than French (Portuguese?  Basque?), I heard the man say "Stupido!" which was easily translatable, and as they left, the nice looking older woman gave the woman in the booth the finger!  I was extra, extra polite to her when it was my turn, shaking my head at the couple's rudeness, and I actually got a smile out of her when I said "Merci beaucoup" at the end of the transaction.
So here we are at home, having a breather before we go out again.  I really love being in Montmartre -- it's farther out than many places we could have stayed, and it's a little more complicated when it comes to getting from here to there, but we're sitting with the door to the balcony open, and I can hear someone singing, many voices, motos going by -- it's just a lovely place to be, especially at this moment.  Full of life and activity.
That's it for now.