November 16, 2015
Tonight we had our first grown-up night; that is, we stayed out until after 11PM.  We had reservations for a dinner cruise on the boat "Le Calife," which is the only dinner cruise boat that has a kitchen on it and makes food fresh instead of having it trucked on like airplane meals.

I had called the English-speaking cab company and ordered a cab for 7:15 PM.  All was well until the cab driver dropped us off in front of the Musee D'Orsay and pointed towards the stairway we should go down.  Down we went . . . and saw nothing, no boat there.  We actually found ourselves at the Parisian equivalent of Muscle Beach -- many people exercising, including doing pull-ups on frames, squats, running, biking, skateboarding . . . .  We thought we saw lights off to the left and so wandered down there but didn't see our boat.  I finally called them and said, okay, we're lost in front of the Musee D'Orsay, and he said look at the museum, then go to the left (the opposite direction from where we'd come) -- it's a five minute walk.

Ha.  Five minutes for us turned into about a 20 minute walk, with me huffing and puffing all the way.  It was about three bridges further down, right across from the Louvre, and we staggered our way down the street (remember our big tour this morning for three hours), cursing our cab driver all the way.  We finally reached the boat and boarded.

And it was lovely.  What a wonderful evening it was.  The food was delicious and the scenery spectacular -- so many beautiful things we passed all along the way, all lit up, and even though it was raining a little bit, it didn't matter.

The highlight, of course, was passing the Eiffel Tower.  The cruise is timed so that it passes the tower at the time that they turn on sparkling lights, but of course, it's closed until further notice.  (We've since learned that it has reopened.)  However, when we passed it, as lit up as it was, with the message projected on the tower, we realized that we were there at a historic moment that was more emotional than any sparkling could have been. 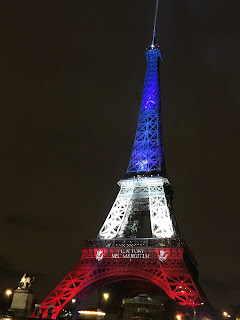 The projected message is Fluctuat nec mergitur, meaning "tossed but not sunk," which has been the motto of Paris since at least 1358.  It was beautiful, all lit up, but also very somber, as things are here this week, definitely.

On the way back home in a taxi, Ed and the driver actually a Franglish conversation about cars, BMW's, Saab's, VW's.  The driver said he admired American cars, Dodge and Chevrolet, and we said, naaah.  It was a good conversation, though.

Deb's phone counts up steps.  We went 8338 today, which her phone says is 3.5 miles.  That's like going from 0 to 1000 mph in the four days since we've been here.  I know we will be coming home in much better shape than when we left!

Tomorrow we will head for Versailles.