November 16, 2015
This morning, not having heard anything to the contrary, we headed for the Metro at 8:30 AM to get to Ile de la Cite by 9:30 to meet David, our private tour guide.  The Metro is quite an experience -- as it was rush hour, it was jam packed and of course we had to stand.  What I don't understand is why people will stand right in front of the fold-down seats without sitting in them, while old farts like us struggle to hang on and not wind up on the floor somehow.  Oh well, it was an experience!

We were to meet David in front of the Palais du Justice, by the golden gates and he was there right on time. We were disappointed to hear from him that the public buildings and museums will continue to be closed for as long as the state of emergency exists.  But rather than scrapping the tour, we decided to make the best of it and had a wonderful time.  David had great knowledge of history and kept our attention for three hours (except for Grace, who focused mostly on identifying dogs of various kinds). 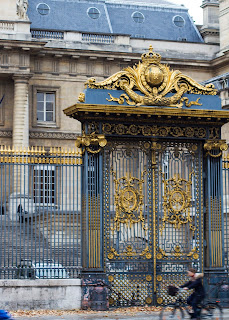 The golden gates were not hard to spot.

We learned the history of the Palais du Justice, which goes back to 52 BCE in the sense that a building has been on that spot since the time of the Romans.  David told us a great deal about Sainte-Chapelle, which was fascinating and for me, disappointing because we couldn't go inside.  But we might go back later, if it opens. 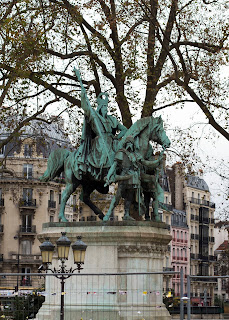 We walked over to Notre Dame and learned its history.  Of course, I had to take a picture of the statue of Charlemagne, the hoped-for ancestor of anyone who does genealogy.  Amazingly, the chapel of Notre Dame, but not the stairs to the top, was open, so we were able to go inside. 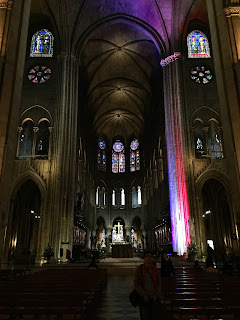 Wow.  On a travel forum recently, we were talking about the experience of finally being somewhere that you've dreamed of -- both my sister and I were overcome with emotion, a little, at standing in this beautiful church.  For me, it was the fulfillment of a life-long dream, to be there.

We walked around to the back of the cathedral to see the flying buttresses.  Somehow I managed to get my iPhone camera on a sepia-like setting, but it actually looks pretty good.  (By the way, I cannot recommend the camera in the iPhone 6 Plus enough.  It takes incredible pictures.) 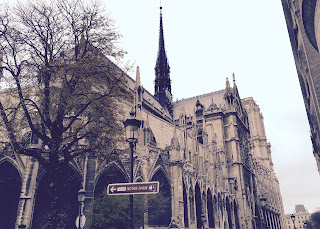 From there, we walked toward the Seine and Ile St. Louis.   I love this view of the Seine -- 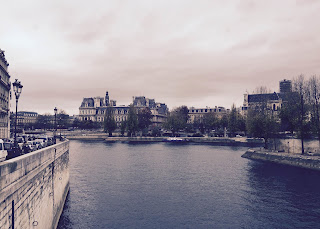 We saw the steps that 200,000 people went down during World War II, to be loaded onto boats, then taken to trains heading for concentration camps.  David told us that 76,000 of those souls were Jews, but the rest were members of the French Resistance and other classes of people.  That surprised us.  It felt very sad to be standing there. 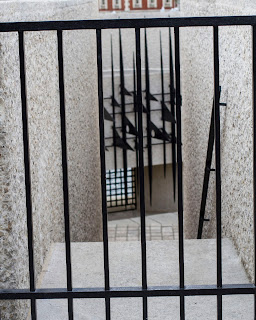 A very somber view down the stairway

From there we crossed the bridge that's covered with locks --  the locks recently had to be removed from another bridge, because the weight of them was too much, but this bridge can hold them, I guess, because they're allowing the locks to stay.  People put the lock on and throw the key in the Seine, and it was funny to think of the thousands of keys lying there at the bottom of the river. 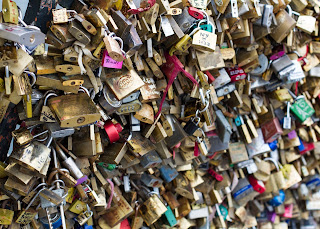 David took us to a beautiful courtyard that was very old, one that was used for training horses for racing -- there were a number of plaques on the wall commemorating horses that won races.  I fell in love with this building -- David said it's much prettier when the ivy is green, but I loved it just as it was. 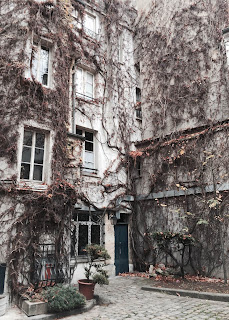 What a beautiful old building!
Did you know that the origin of Sweeney Todd  was not in England but in France?  This is the original bakery where the meat pies were made of an unsavory kind of ingredient -- David said the two people who ran it would kill people for their money and then bake them into the pies!  Yikes!!  Those two suffered an extremely gruesome death themselves, once their scheme was discovered. 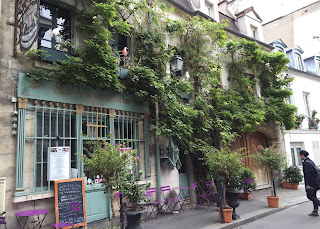 Meat pie, anyone?
After this, the intrepid travelers were just about toast -- I wish I'd had my Fitbit on today, because it would have been interesting to see how many steps we did, starting with walking to a more distant Metro station so that we wouldn't have to change trains, and then following David all over Ile de la Cite.
So we finally said "Au revoir" to our wonderful tour guide, and hopped into a taxi, rather than braving the Metro again.  We were all pretty pooped at that point and wanted to get back to the apartment to take a nice afternoon nap before our next event -- a dinner cruise on the Seine, which doesn't board until 7:30 PM or so.  One of the highlights of that cruise was to be the Eiffel Tower's light show, but sadly the tower is closed until further notice; David said that it's just too difficult to make that site secure, and the police/soldiers are needed in other places.
So that was our Monday morning tour.  I think we all enjoyed it greatly, mostly due to our excellent guide.  We learned a great deal about a very historic area of Paris, and if things open up, I'd really like to go back, especially to see Sainte-Chapelle.