November 13, 2015
Okay, "exploring" might be a little excessive -- we took the funicular up to Sacre Coeur, went through the church, found the Place du Tertre, had a drink at a cafe, examined the offerings of the painters . . . and headed down the hill toward home.  Still pretty tired, sleep was odd last night (I slept from about 8 PM until 12:30, then was up until maybe 2:30 AM and then got a few more hours).  We're all still adjusting. 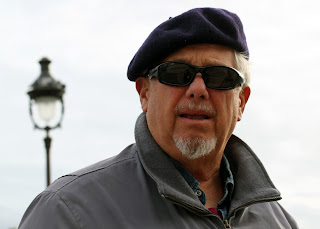 Perhaps because we took the funicular instead of the stairs, we weren't accosted by anyone.  We did see two women asking for money outside the cathedral. 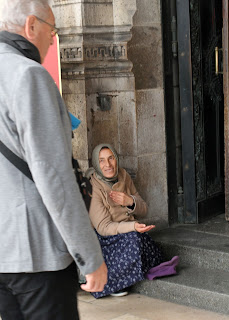 She was very quietly asking for money.

Sacre Coeur is beautiful -- the outside is very majestic, and inside are many beautiful things to appreciate. Being a good girl, I obeyed the "no pictures" sign, mostly because it's hard to make a 7D not be obvious.  Another in my party, though, sneaked a few cell phone pics.  I'm not saying who. 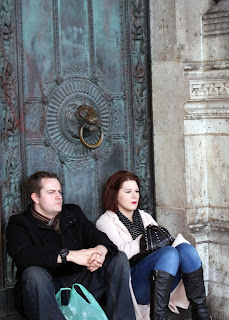 I liked this couple, who looked as if they had had enough sightseeing for the day.  I'm not a good street photographer at all.  I focused above their heads and then at the last second focused on them and shot the pic.  The woman then looked right at me, but she didn't say anything.  My son, on the other hand, can literally "shoot from the hip," not even looking at what he's getting, and good pictures come out.  Don't know how he does it. 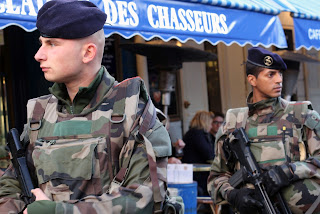 Two rather heavily armed patrols
Unlike the bobbies in England, police in Paris come loaded for bear.  Ed says these are not gendarmes but army guys, and it's a bit unnerving to see them walking around with their semi-automatic weapons.  I guess the scammers are supposed to scatter when they see them coming. 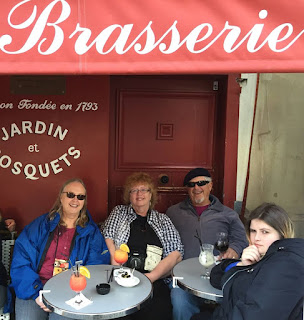 Here we are, flaneuring at the oldest cafe in Place du Tertre

Deb and I walked all around the square, looking at the painters.  There were several that caught my eye, but in the end I fell for the style of this particular man who uses pen and watercolor. 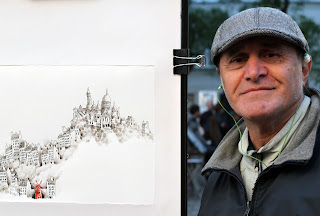 I loved the look of his work


On the way down the hill, we ran into this interesting little tavern. 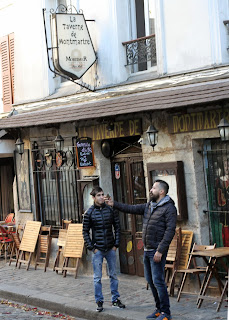 The guy was taking a selfie with this in the background -- 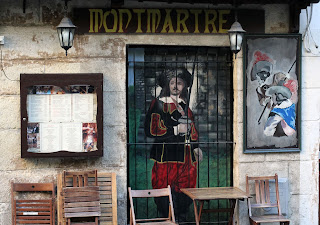 I always loved The Three Musketeers, and this looks like one of them.  Athos, Porthos, or Aramis, I wonder?

Off to some museums tomorrow, I hope.  And a review of a tremendous restaurant we visited tonight.
#geneabloggers #makingfamilyhistory family history France geneabloggers Paris Paris2015