November 18, 2015
Today we braved the train system in order to go to Versailles.  I do have to say that what looks easy on a map or on the RER app is actually way more confusing in reality, and led to any number of moments of tension in which I was pretty sure I knew what I was talking about (but didn't), and others of the Musketeers questioned my judgment, leading to a fair amount of huffiness on my part and our almost missing the train (twice) because I was pretty sure it was going to be a different one.  By the time we came back, we opted for a taxi from Musee D'Orsay rather than taking the Metro to Abbesses, 1) because we were tired of looking for the right place to be, and 2) because when we left in the morning, I swear to god we had to go down 8 flights of stairs to catch the Metro at Abbesses, and none of us saw an elevator that might be employed to haul our half-dead corpses up on the way back.  Zombies we were, yes indeed. 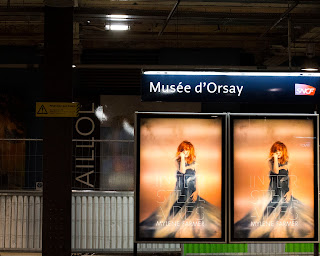 I liked this ad in the station.

We finally found the train and got off at Versailles-Rive Gauche, and a nice friendly man from Utah we'd met while we were looking for the train asked us whether we were going to walk or take a cab to the Chateau.  We said we were walking because on the map and on the website, they'd said it wasn't far.  Just for the fun of it, we refreshed ourselves at McDonalds (come on, we had to try a McDonald's once in France) with drinks and macarons (definitely not on a par with the ones on our street in Montmartre), bought our tickets to the Chateau, and went on our merry way.

Have you ever been to Windsor Castle in England?  It's like that.  You walk through the village, and then a long way up a hill before you're finally in a place where you can actually enter the castle.  At Versailles, you see a golden gate and think, maybe that's it, but behind that gate is another one, and then a long courtyard, and at some point you finally make it into the good stuff. 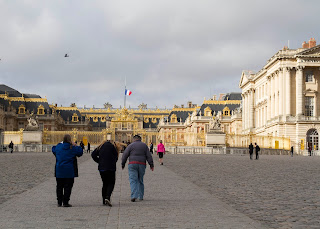 Ed, Deb, and Grace heading for the Chateau -- me, catching my breath under cover of taking a photograph.

Once inside, it's pretty amazing.  Amid the tourist groups and people jockeying for space to take a picture, there comes a moment, once in a while, when you can stop and imagine actual people living there, walking through the rooms, carrying out their business and carrying on their lives.  It's mind-boggling, really, that people could live in such splendor and opulence.  At the same time, I know that where a lot of the nobles lived was far from opulent, and I wish I could have seen some of their apartments.  But still, it almost beggars description: 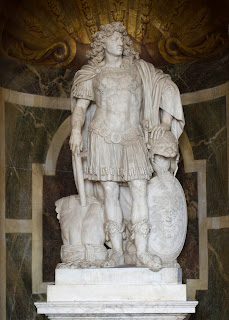 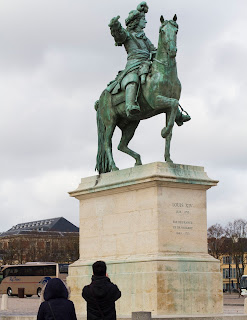 The Sun King was fond of representing himself in different ways.

The bedrooms, of course, were incredibly beautiful: 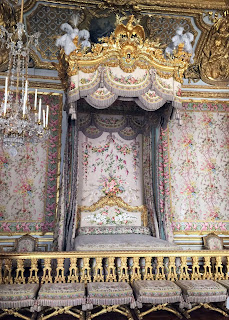 Marie Antoinette's bedroom
The beds were so high that they must have used ladders to get into them, but they weren't on display.  In the corners of Marie's bedrooms were semi-secret doors that Louis could use to come visit her privately. 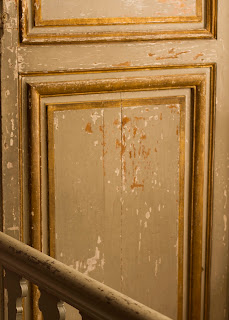 I liked the vignettes that seemed fairly original -- in a lot of places, the window shutters looked as if they hadn't been updated in a long time.  I wonder when those scratches were made?

We took the "petit train" down to the Petit Trianon.  It was interesting to see the kitchen and other "downstairs" rooms of the house.  But at that moment, we just felt done and so hopped on the little train back to the main chateau and made our way to the train, heading for home.  On the way, there was some beautiful light in the courtyard, lighting up the statues on the roof: 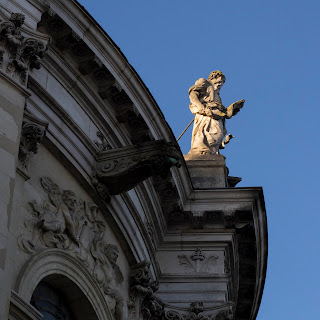 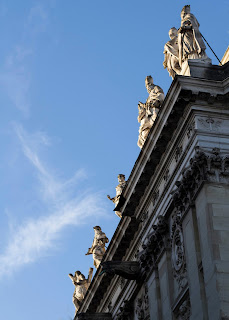 We found our way back to the station, to the train, and to Musee D'Orsay, and to a taxicab to take us back to Montmartre.  We decided to get takeout pizza from two different restaurants -- at one, they had basically never heard of pepperoni pizza but cheerfully agreed to make it; at the other, they made pizza with chicken, onions, capers, corn, and a delicious white sauce.