The flight over was . . . meh.  I'm not much  impressed with Air France -- the boarding process was chaotic, the plane was way overheated (there are no air jets to control), the food was mediocre, and even though we paid for Premium Economy seats, it wasn't comfortable.  The seat I was in had a piece of metal sticking out and into my posterior.  And of course, it goes on for 10-1/2 hours. 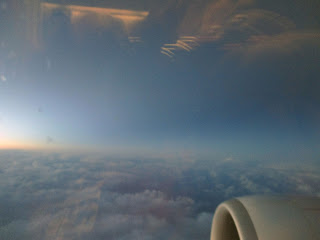 But, we got to CDG and after negotiating the maze of corridors, border patrol, baggage claim, and customs, we finally got out and breathed some fresh French air.  We found the legal taxi spot outside, and despite my having practiced many times what to say in French ("Nous sommes quatre personnes...."), all I had to do was hold up four fingers and say "quatre" and there we were, piling into a cab.  We had no problems arriving at our Montmartre pied-a-terre, and found our way in.  (The only glitches:  We couldn't find the door marked "B," I walked into someone's apartment thinking it was a vestibule, only 1 person + 1 suitcase could go up at a time, the key was not under the mat where it was supposed to be, etc.  Pretty normal for being strangers in a strange land, I think.) 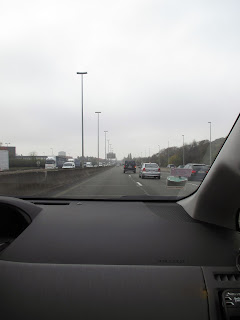 A somewhat dreary day on the way into Paris

We had time for a short rest, and then right on time, Jean-Baptiste from 4 Roues dans 1 Parapluie picked us up in a Citroen DS for an "Essential Paris" tour.  We drove all over the city, seeing so many beautiful sights, from the Eiffel Tower to the Arc de Triomphe to the Louvre to the Opera Garnier to Notre Dame -- we hit it all, I think.  What a beautiful place Paris is!  We couldn't get over how gorgeous and impressive all the buildings were. 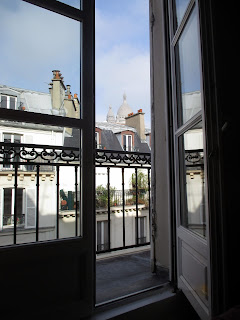 The view from the bedroom, with Sacre Coeur in the distance.

When we got back, we were starved and exhausted, so we had dinner at Cafe Chappe across the street, where we had French onion soup (I guess you don't have to say "French" in France), omelettes, crepes, etc.  It was excellent fare for tired travelers! 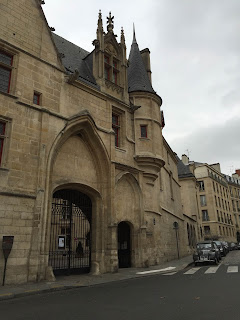 I don't know the name of this building, but it looks nice --

I think we had kind of a restless night, because we were all overtired -- I slept from about 8PM until 1 AM and then more after 2:30AM.  Ed was up and out around 6AM, looking for coffee and croissants, but where Starbucks in California opens at some ungodly hour like 5 AM, here the boulangeries seem to open between 7:00 and 7:30, so he had to wait.  But in the end I had a delicious croissant that probably I should have only eaten half (or maybe a third) of, but it was so good. 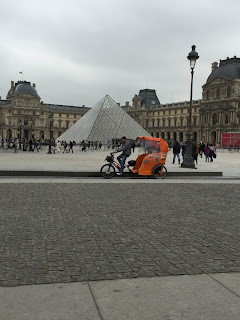 The Louvre -- we couldn't believe how immense it is!

So today we head up the Funicular to Sacre Coeur and then wander down the streets of Montmartre.  It's supposed to be sunny today and tomorrow so we should maybe get up into the 60's. 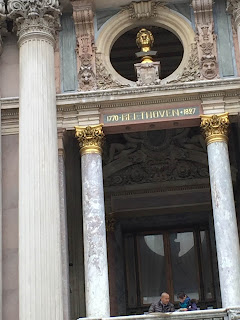 Part of the facade of the Opera Garnier

Will post again soon!  Oh, and French baguettes are exactly what you dream of -- and as I've read, there's a lot of flavor in the crust.  A bientot!  (I don't know how to make the little marks, sorry --)
#geneabloggers #makingmemories #travelogue France Montmartre Paris Paris2015