November 27, 2015
Pre-dawn Wednesday morning was a blur of activity.  We were up at 6:00, rushing around to get the last few things packed, the last bags of debris taken down to the garbage, and to get ourselves and our suitcases, one elevator ride per person, down to the courtyard in time to meet the taxi at 6:45. 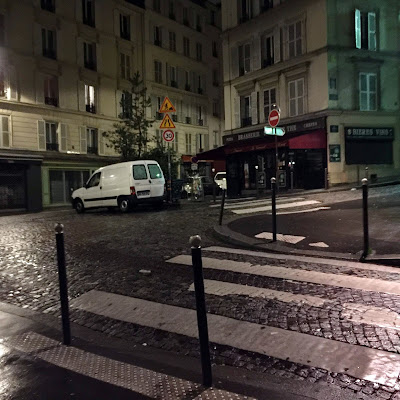 Goodbye to our little corner

I think I've mentioned before that we used the "G7" taxi a lot; for this morning, I had told them that we needed a "maxi-taxi," because there were four of us and four large plus numerous small pieces of luggage.  They showed up right on time . . . with a Prius.  We weren't too happy about that, but it turned out that the hatchback fit the four large suitcases and we could hang onto the rest on our laps, so we squished ourselves into the Prius rather than making an issue that would delay our departure.  And off we went.

While we were not thrilled about having to be at CDG at 7:30AM (for a 10:30 flight), it turned out to be fine.  We could see the other side of the highway already looking like a parking lot by 7:00, but our side was smooth sailing.  We reached Terminal 2E and tearfully said goodbye to Deb, who was going directly home to Minneapolis on a Delta flight, while we were off to San Francisco on Air France.  The driver dropped us at 2F, and there we were, a few minutes before the Air France counters opened up.

We were concerned about getting through security because of the heightened level of threat and because we had received an email from Air France telling us that all electronic devices had to be fully charged if they were in our carry-ons.  Unfortunately, the night before we'd had a bit of a recharging crisis, wherein our plugs that had worked just fine for the previous two weeks suddenly were charging about 1% per 30 minutes, which wasn't going to get my iPad from 60 to 100%, even overnight.  That added a bit to our anxiety, but to our surprise, the security check seemed somewhat relaxed rather than more intense.  They didn't ask to see anything but laptops.  Go figure.

Of course I, with my knee replacement, had to be pulled aside and searched more thoroughly.  Don't let anyone tell you that someone with a knee replacement can just bring a note from her doctor -- they don't want no stinkin' note.  They'll scan you from head to toe, run their hands inside the waistband of your pants, and then say, right, your knee, and though you want to say "That's what I told you," you don't.

Then, it being CDG, we had (what seemed like) a four-mile hike to get to our gate, which was in the "L" series.  Having had to run to make a connection on another occasion, I was happy that we had all the time in the world to saunter to Gate 22L.  We also had time for coffee and a final croissant before the flight boarded. 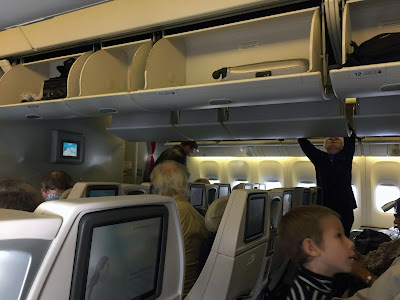 
Because of our various joint problems, and because we can, Ed and I fly Premium Economy. In theory, it's a lot more comfortable and you get all kinds of perks -- you do get priority check-in and boarding, which is great, along with more legroom and seat-room.  It's definitely better than regular Economy, but is it comfortable?  Not really.  Through the curtains, you can see people in Business class with completely reclining seats, sleeping away, and you wish it were you sleeping there.  If you're like me and you can't sleep on a plane, you while away the 11-1/2 hour flight watching the map with the little plane crossing Normandy . . . Ireland . . . then Greenland . . . and so on. 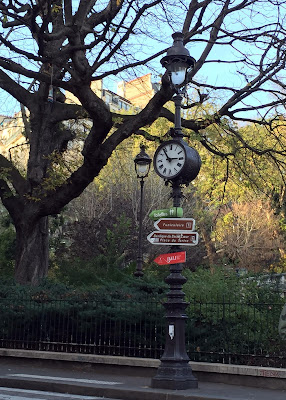 A lightpole near our street


To make a long story short, we landed at SFO in good time and made our way through the holiday traffic to our car and then on to home.  When I'm on my way home from an airport, I always think about how recently we were at our previous location -- just a few hours ago, really, we had been in Montmartre, in Paris, loving our time there.

I'll write a post summarizing our trip, what worked well and what didn't, what we loved, what we missed.  But I can already tell you that it's a time we'll never forget. 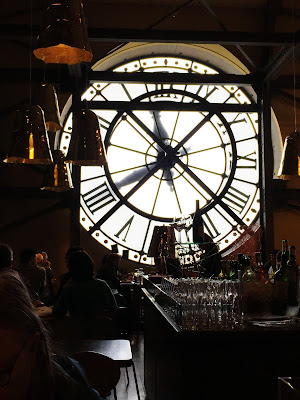 One of the clocks at D'Orsay

P.S.  I apologize for the somewhat erratic fonts in previous posts -- I don't know what's caused it, but being somewhat perfectionistic, I have to fix it.
#geneabloggers #makingfamilyhistory #makingmemories #onourwayhome #Paris Air France geneabloggers home Montmartre Paris Paris2015