When I was preparing for our now-aborted trip to Bruges, I spent literally a couple of hours searching for a restaurant that would serve what I wouldn't leave Belgium without:  Carbonnade a la Flamande.  It's a beef stew made with bacon, onions, and beer, and it's delicious.  I've made it many times in my lifetime, and I really wanted to try it at the source.

So tonight we decided to dine at the Cafe Bruant, a restaurant highly recommended for its Moules Frites (mussels and fries), which we all wanted to try.  It was just a short walk past Abbesses Metro station, and we headed there fairly early.  As we crossed the street to the restaurant, I saw the chalkboard with their special of the day written in white:  Carbonnade a la Flamande. 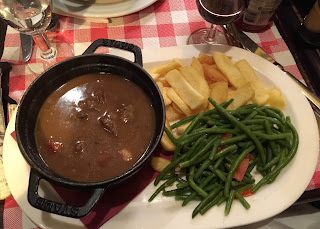 One of my favorite dishes of all time.

I just started to laugh -- it was a little sign from somewhere that all was not lost, that despite the problems we've had, I could still have a bit of Belgium right here in Montmartre.  And it was delicious, as were the mussels.  Grace had the Muniere, Ed the Provençal . 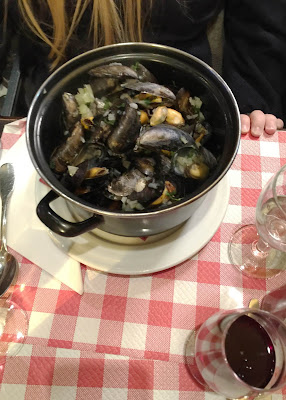 It's a fine restaurant; we recommend it.  We also had a bottle of Beaujolais Nouveau -- we missed the celebration last week, when the new wine is delivered to Paris and opened at midnight.  But tonight we enjoyed the fresh taste of a bottle -- 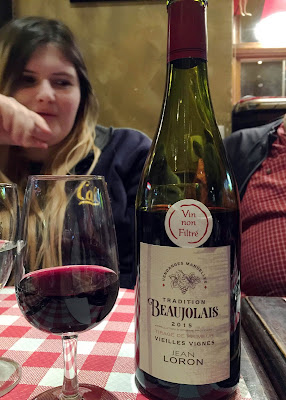 We were  surprised at what a hoppin' place Montmartre is on a Sunday night in November -- so many people in the streets, dining outdoors (the temperature is in the 40's), strolling, peering in shop windows.  On the walk home we stopped by an alley that had some interesting graffiti. 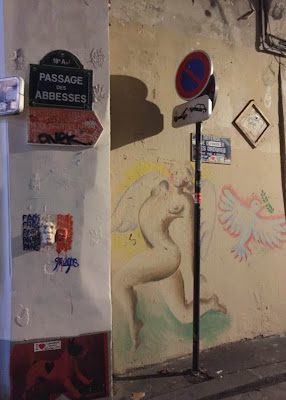 Graffiti is everywhere in Paris -- some is very appealing.

Deb and I zeroed in on one particular piece of the graffiti -- she says that since we've been here, she's seen it painted three different ways.  We really loved it. 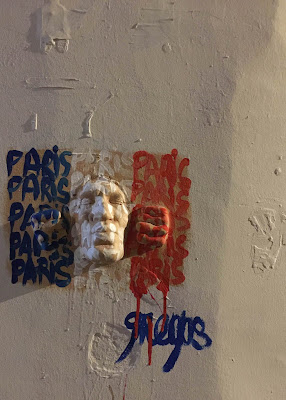 So much for tonight -- we're enjoying the macarons we got at the Christmas market today, and watching a program in English on the tv.  Another good day in Paris, in spite of everything.

Oh.  By the way.  As we got up to leave the restaurant, I said I wanted to stop for a second and take a picture of the chalkboard.  It was gone.  No daily special.  (Cue the Twilight Zone theme . . . )