November 17, 2015
We postponed our trip to Versailles until tomorrow because I passed a pretty much sleepless night last night.  I was having trouble drifting off, so I went to pull the sofa bed out in the living room, pulled too far, and the pieces came apart with a gigantic crash at 1:30 in the morning, followed by my dropping my iPad flat on the wood floor, making another loud noise.  Since it's very quiet here at night, I sat for a while just not moving, trying not to make any more ruckus, looking at the bed which was partially headed downhill, partially uphill (where the pieces had come apart) and which had a large gap between the two sections of mattress.  I tried to curl up on the top part and get some sleep but it just didn't come, so by morning I was exhausted and not ready to do anything but go crash in the bedroom, which I did for hours.  And hours.  While my traveling companions explored more of the neighborhood, bought gifts to bring home, and had a nice lunch.  I finally woke up, and it's a wonder what a few hours sleep, a nice hot shower, and a carton of peach yogurt can do.

And here are a few random thoughts on Paris, and a few more pictures.

1.  Fashion.  Yes, Parisian people mostly dress very simply and mostly wear black and other neutral colors.  Since it's November, many are wearing scarves, and the things I've heard are true -- I sat on the Metro and watched a young woman take off her scarf and redo it, winding it and tying it and coming out with something unique and attractive that I could never do.  All that black clothing complicates another problem that you hear a lot about . . . 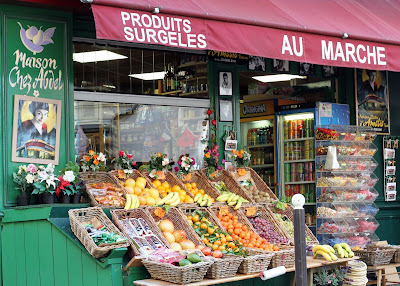 The fruit stand from Amelie, here in Montmartre.  You can see her picture off to the left.

2. . . . the driving and traffic.  In Italy, except for a few taxis, we didn't spend much time in cars, but it looked pretty chaotic in a place like Florence. Ha!  Florence has nothing on Paris, where as a passenger you have to just close your eyes and hope you reach your destination across town without flattening a pedestrian or two or mangling a bicycle and its rider.  I was in a conversation in Santa Cruz recently with someone who was bemoaning the problems of being a pedestrian in that sleepy seaside village (compared to Paris), and who would never attempt to cross a street without having made eye contact with a driver at a stop sign.  Here pedestrians just dart across the street (in their black clothes, at night), in every which direction, against the lights, cars and motos weave in complicated patterns on different trajectories, and bicyclists cut within inches of the front of a taxi  without even turning their heads to look.  We're trying to imagine how any young French person gets the courage to sign up for drivers training and makes it through without having a nervous breakdown. 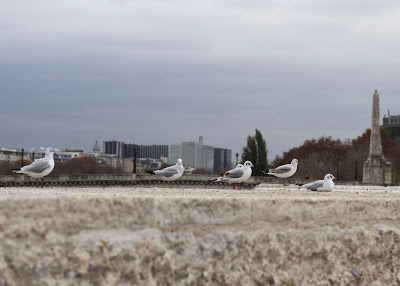 A few Parisian seagulls, down by the Seine.

3.  There's a school for fairly young children at the end of our street, and the kids seem to spend at least as much time outside at recess or P.E. as they do in class, which is a good thing I think.  America seems to be moving in the completely opposite direction.  But the air here is full of the laughter and shouts of children running around and playing games, which is how it should be. 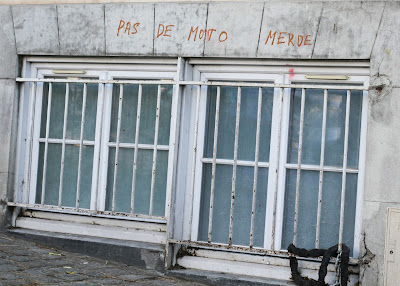 A warning painted on the side of a house on Montmartre.  I understand the "Pas de moto," but why the "Merde," rather than "Merci"?

4.  The French language -- we are muddling through with our Duolingo vocabulary and Ed's and my dredged-up high school and community college classes.  But where in Italy our utterances were pretty much limited to "grazie," "molto bene," "scusi, scusi" and my favorite, "Ciao, tutti!" here in Paris we can do significantly better.  We seem able to blurt out occasional whole sentences, like "Combien cela coute?" or "Nous sommes quatre personnes" when entering a restaurant, though sometimes I launch into something like "Je voudrais . . . " and then trail off because I don't know where to go from there.  But we can carry on a Franglish conversation pretty well, and many French people are happy or at least willing to use their English with us.  So we're doing fine on that front. 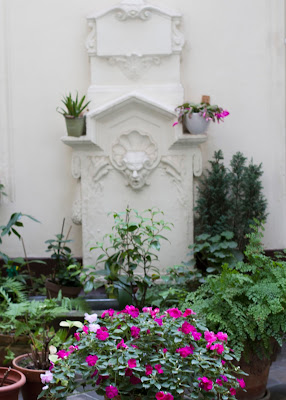 A small vignette from the courtyard of our apartment building.

5.  Something our tour guide, David, said yesterday, made me happy -- "It's unusual for a first-time visitor to Paris to know so much history already" -- so all that reading of Scaramouche and The Scarlet Pimpernel and The Count of Monte Cristo when I was 12 or so was time well spent!  (Plus other books since -- )

So, there you have it for now, a quiet Tuesday in Paris.  Off to Versailles tomorrow and then on to other sites that we understand are now opening.