November 14, 2015
Wow, we're overwhelmed with the outpouring of concern and prayers and good wishes for us here in Paris.  We're fine.  It feels as if a lot of people left -- last night, Montmartre was filled with what I assume was the revelry of a normal Friday night -- lots of laughter and shouting, an accordion playing under our window -- and then, as the news began to spread, quiet quickly descended on the neighborhood.  Today it feels as though there are fewer people around, but that could be my imagination.

Tonight, after lying low all day, we went to the highly recommended Nanou Bar, about two blocks away.  What a wonderful place that is!  It's a tapas bar, very much a family affair (it seemed about 75% family and 25% customers). 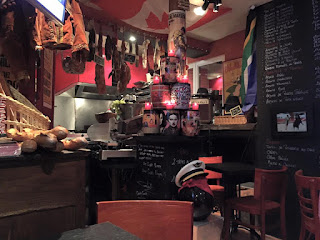 We started with several "beignet" items that had nothing to do with New Orleans beignets.   We enjoyed Beignet d'Oignon (onion rings), Croquettes de Fromages, and calimari (I can't remember it in French).  Each one came with a delicious sauce for dipping -- a tomato aioli, tomato jam, and something tartar-sauce-like with the calimari. 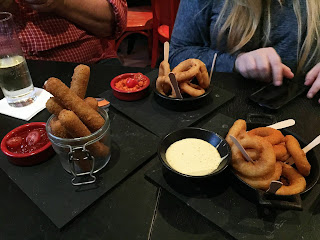 Then we followed that up with an amazing plate of mixed charcuterie -- meats and cheese, with fruit and bread.  It was wonderful. 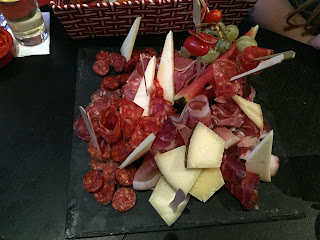 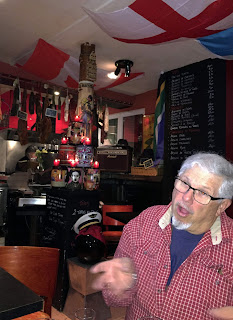 I'm sure he was saying something in French --

And here's Grace having what may or may not be her first ever alcoholic drink  ;)  a Kir Royale: 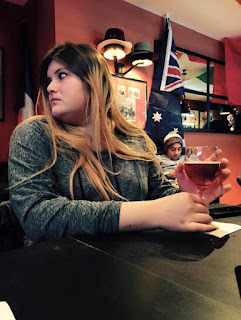 And here was the best part -- all the while we were there, they were playing French popular songs and everyone was singing along, except us, who wished we could sing along, too.  But suddenly, a French cover of Del Shannon's "Runaway" came on, and we joined in (in English), singing at the top of our lungs.  It just made the evening, with everyone singing along and laughing together.  Okay, it wasn't "La Marseillaise" like in Casablanca, but it was a good moment. 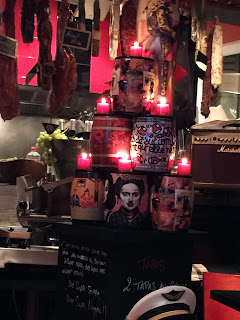 I liked this lit stack of kegs.

At one point, a man who had been drinking at the bar came back to where we were, before he left, to say "Thank you for being here."  That was very touching and felt like a small moment of solidarity with the Parisians who have endured so much this year.

Tomorrow we're off to Ile de la Cite to have a private tour of that most historical place.  It will be our first attempt to use the Metro.  Wish us luck!  Meanwhile, Sacre Coeur shines through the darkness -- 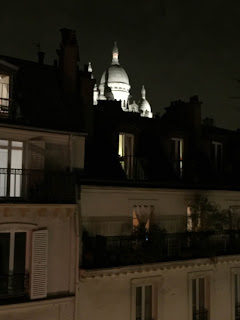 Updated to say:  No tour tomorrow.  Everything will still be closed.