Robert Burns said it best -- we can plan and plan and take every contingency into account (we think) and then just like that, all plans are out the window.

Here's a round-up of our trip to Paris:  the wonderful, the not-so-great, and the very, very bad.

1.  Let me say up front -- Paris is an amazing place to be.  We were there for two weeks, and we could have stayed for two more, finding interesting things to see and do.  It's infinite.

2.  The day after we arrived, the terrorists attacked.  Though we were never in any danger and felt little of the horrible effects the Parisians suffered, it did cause some changes in plans on our part.  We couldn't visit any museums or monuments for three days.  We spent one of those days kind of sheltering in place in our apartment, then the next day got out and explored around Montmartre.  The third day, we had a private tour of Ile de la Cite; we couldn't go into anything except Notre Dame -- but the tour was wonderful, nonetheless.

3.  The terrorist attacks also made us cancel our longed-for trip to Bruges.  The very day we were to go, Brussels declared the highest level of alert -- imminent terrorist attack anticipated.   Citizens were told to avoid places where people gathered, including train stations . . . and we had to change trains in Brussels both going there and coming back the next day, when the high alert was still in force.  We decided to stay in Paris.  I cried myself to sleep that night . . . and felt guilty that I was thinking about me at such a difficult time for the people of Paris and Brussels. 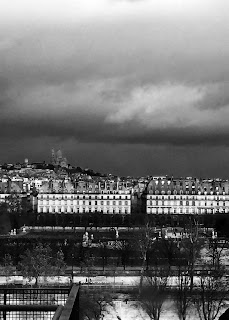 Montmartre in the distance, seen from the D'Orsay

4.  On a happier note, Montmartre is a wonderful place to stay.  Yes, it's a bit off the beaten path and getting around can involve a few more Metro changes, but we loved every bit of staying there.  So many great shops (perfume, macarons, and beautiful handbags right on our block) and restaurants.  Accordions playing under the window, people singing -- we loved it.

5.  If you speak English and need a taxi, call the G7 taxi company.  They were on time, every time, they were very easy to speak with, and you can ask for an English speaking driver.  It's a little dicey, how much the driver actually speaks English, but it helps. 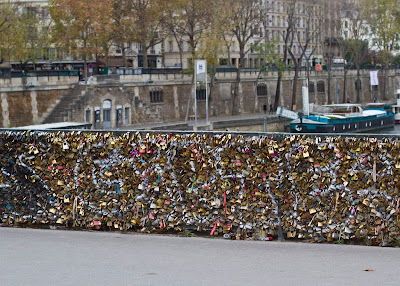 The bridge of locks

6.  Speaking of language -- if you are someone trying to get by on your high school/community college French, you'll likely be frustrated.  While we could easily order something at a restaurant, we had a hard time interpreting written text or making sense of French television.  It wouldn't have mattered, except for the night of the terrorist attack, when we were watching the news with French subtitles in the hope of understanding what was going on.  Trying hard to understand French with minimal ability leads to frustration and quickly to a headache.

7.  Before we left, I read on various forums that the pickpocket/scam artist thing was a serious issue.  We had no problems whatsoever with scam artists -- at one point, I was approached by a woman with a petition in support of the deaf; I told her no several times, and she went away. At the D'Orsay, we were approached by two teenage girls who wanted to borrow our cell phone because they were separated from their family, but we said no.  (We actually didn't know if they were scammers or not, but we told them they'd be better helped by going to the information desk.)  That was it.  The portrait painters at Place du Tertre were much more irritating in soliciting your business.  We each used an around-the-neck pouch (custom made for us by Kapom Crafts on Etsy) and had no worries at all. 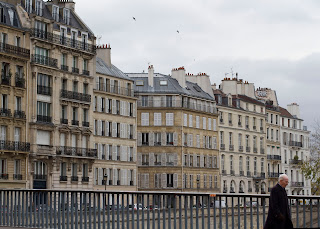 Haussmann buildings along the Seine

8.  Viewing vs. experiencing:  Besides planning to visit museums and other important sights, we scheduled a number of what I thought of as "experiences."  We visited Le Studio des Parfums where we created our own perfumes, which was great fun.  We also spent a morning with Pauline Fraisse, a wonderful artist and teacher, working on our watercolor painting.  I highly recommend these kinds of experiences.

9.  I always think of Germans as being a hardy people, but I think the French give them a run for their money.  Our last night in Paris it was cold and rainy and yet the outdoor areas at the Rue des Abbesses restaurants were full of people, as were the streets. 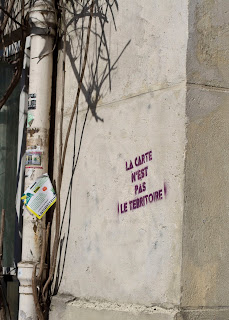 10.   Pay attention to the graffiti in Paris.  Some is the ordinary type of tagging that you will see anywhere, but you'll also see artistic, political, and other types of graffiti.  Some of it changes over time.  Pay attention . . .

I'll stop here for now, though I may come back and add a few more thoughts as I think of them.  Overall, we had an unforgettable time in Paris.