April 30, 2016
Elizabeth O'Neal at "Little Bytes of Life" has started something that should have a great future:  The Genealogy Block Party.  She sets up a situation, and bloggers jump in and write about it.  This is my kind of fun, so I'm participating.  (Good thing I discovered it, because the deadline is midnight tonight!)  So here's the situation:

You and The Doctor (of Doctor Who fame) have just finished saving the Earth from nasty, alien monsters. As your reward, The Doctor has offered to take you for a ride in his TARDIS to meet one of your ancestors!

This is such a hard one!  Who will I choose?  I have to choose my great-grandmother, Annie Schwietering Ortmann (1856 - 1936).  She doesn't present a brick wall, since I can follow her line way back in Germany, but I have so many questions that I'd give anything to have a chance to meet her.

I'd probably need a couple of hours to talk to her because my list of questions is long!  I'm going to put aside 19th vs. 21st century proprieties and ask my questions bluntly -- no time to pussy-foot around.  Here goes.

How did you meet your husband, Joseph Ortmann?  You were married in Tremont, New York -- is that where you met him?  You were 18 and he was 29; what attracted you to him?  Was the idea that he was a Civil War veteran appealing?  Was he handsome?  Funny? Kind?

This is one of my frank questions:  You were four months pregnant when you and Joseph married -- is that why you married him?  Was it a shotgun wedding?  Would you have married him otherwise?

Another blunt question:  Between the ages of 19 and 44, you gave birth to 12 children, three of whom died.  How did you feel about having that many children?  Was it just an accepted thing, being pregnant every other year?  Being Catholic, did you use any birth control at all?  Did you ever say, "Not tonight, Joe," or was it your duty to be there for him any time he was in the mood?  (Sorry, really, for getting so personal.)

Why did your family move so often?  When I look at both state and federal censuses, I see that you're always living in a different place in either New York or New Jersey.  Were you moving to a bigger place?  Was it upward or downward mobility?  Joseph had quite a few different jobs over the years; was it feast or famine, depending on how he was doing, and did the "famine" parts of the cycle cause you to have to move?  In 1900 you were living at 327 W. 36th Avenue, undoubtedly a tenement, in Hell's Kitchen, an unpleasant and dangerous place.  Was it ever better than that? 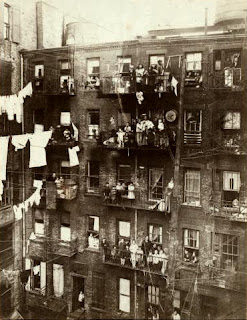 Was this the kind of place where you lived?

With so many children, what were your living conditions like? How many rooms did you have in your apartments?  Where did you all sleep?  How did you cook for all those people, do laundry, clean?  I'm assuming that as the children grew up, they were tasked with helping around the house and with the younger children, but wasn't it hard for you?  Were you always tired?

Your daughter Anna never married, never left home, although she seems to have worked at various sewing kinds of jobs -- was Anna mentally or physically disabled?  Was she born somewhat prematurely?

Why in the world did Joseph try to pass himself off as Irish rather than German?  As a German immigrant, wasn't it obvious that he wasn't Irish?  Did this all result from a mix-up during the Civil War that he was just trying to live with, or did he actually, intentionally, say that he was Irish?  Wasn't it worse at that time to be Irish, rather than German?  This created terrible problems when he and later you wanted to receive his pension, but in a way I'm grateful for it, because all the confusion resulted in a 60-page pension file I was able to get from the National Archives.

Why was my grandfather, William Ortmann, disowned?  Was it really because he married a Lutheran, or was there some other reason?  Did you never see him again or meet his son, my father?  If disowning him was Joseph's stance, did you ever sneak off to see your youngest grandchild? Did you see them after Joseph passed away?  My grandmother said that no one in the family ever talked to him again -- I have a hard time understanding that, and if it's so, it's very sad.

Once your husband passed away, were you able to live a quiet and happy life?  You were poor, that's certain, with an income of $40 a month from Joseph's pension; did any of your many children help to make life easier for you?  (Herman, in particular, was rather prosperous.)  Did you live a quiet but happy life?  Were you able to spend time with your grandchildren?

Did you have dreams, Annie?  Was your hope always to be a wife and mother, or did you have other dreams?  Did you want to paint, or travel, or write -- or were those things foolish notions for a woman of your class and time?  What were you good at?  Embroidery? Did you like to sing?  I've always assumed that the musical talent in our family came from our grandmother's side, not yours, but I don't know that for sure.  Maybe you were musical too.  You were literate -- did you like to read?  (Did you ever have time?)

I think the biggest problems you had must have been related to poverty and to Joseph's changing jobs all the time.  I'd like to go back in time and make you "Queen for a Day," to take you away from where you lived for a little while, to a place where you could rest and feel safe and even be pampered.

I would definitely reveal myself as her great-granddaughter.  I guess this should have been a harder choice, but I don't think I could stand not telling her and not being able to give her a long, long hug.  (All I'd have to do is explain about the Tardis, right?)  The one thing that I would hope to change would be her attitude toward her son, my grandfather.  My father's maternal grandmother was long gone; maybe he would have enjoyed having a grandmother in Annie.  I think I could have made my grandparents and father happier if I could reconnect them with their family . . . but then I could be wrong.  I can't know what the reasons were.

I can't decide whether I would bring Annie Ortmann to the future.  Would it make her happy to know that life became better for her descendants, or would it make her more unhappy about her present circumstances?  None of us, starting with her children's generation, lived in such poverty -- maybe she had an idea that things were going to get better in the future.

What an interesting exercise this has been!  Thanks, Elizabeth, for the prompt, and I'll look forward to joining you again next time.  (By the way, I am the Renegade Time Lord known as "The Explorer."  Sounds about right.)
#family history #geneabloggers #genealogy #genealogyblockparty #hellskitchen familyhistory geneabloggers genealogy New York City Ortmann